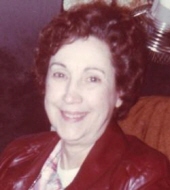 New Iberia - A Mass of Christian Burial will be celebrated at 2:00 PM Friday, September 9, 2011 at Sacred Heart of Jesus Catholic Church in New Iberia for Mrs. Levis E. Dartez, the former Annie Mae Clark, 96, who passed away at 3:00 AM Tuesday, September 6, 2011 at her home. Entombment will follow in Memorial Park Cemetery. Monsignor Richard Greene will be the Celebrant. A loving Mother, Grandmother, and Great Grandmother, Mrs. Dartez was born on December 28, 1914 in Patoutville, was a resident of New Iberia . She was instrumental in the day to day operations in the family sugar farming business. She was a member of the Home Demonstration Club and was a caregiver for many years. Survivors include her three sons, Gerald Dartez and wife Claudette of New Iberia, Michael Dartez and wife Patsy of Houston, Daniel James Dartez of New Iberia ; grandchildren, Joey, Marshall, Lance and Christine Dartez, Bridgette Dartez Cunniff, Michael Wayne, Dane, and Chase Dartez, Ashlyn Broussard. Mrs. Dartez is also survived by seven great grandchildren. She was preceded in death by her husband, Levis E. Dartez; her parents, Albert and Margarite Dooley Clark, and her sister, Irene Ackal. Mrs. Dartez also leaves behind her cherished dog, Sue-Sue.Pallbearers will be her six grandsons. Honorary pallbearer will be Shawn Cunniff. The family would like to express their sincere gratitude to her wonderful caregiver, Janie Guillot, and also to Hospice of Acadiana. Memorial contributions may be made to the Miles Perret Cancer Services, 2130 Kaliste Saloom Road, Suite 200 , Lafayette , LA 70508 . A gathering of family and friends will be Friday from 9:00 AM until 1:30 PM at Pellerin Funeral Home, 502 Jefferson Terrace Blvd , in New Iberia . A rosary will be prayed at 11:00 AM Friday. Pellerin Funeral Home, 502 Jefferson Terrace Blvd., New Iberia, LA 70560, 337.365.3331, is in charge of arrangements.
To order memorial trees or send flowers to the family in memory of Annie Dartez, please visit our flower store.