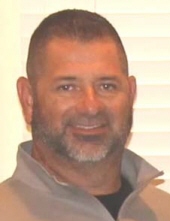 Loreauville - A Mass of Christian Burial will be celebrated at 10:00 am, on Tuesday, November 17, 2020 at St. Joseph Catholic Church in Loreauville for Greg Bodin, 52, who passed away on Wednesday, November 11, 2020, in Loreauville. Entombment will follow in the Holy Family Cemetery. Rev. Barry Crochet will be the Celebrant. A gathering of family and friends will be Monday from 3:00 pm until 9:00 pm at Pellerin Funeral Home in New Iberia. A rosary, led by the Men’s Rosary Group, will be prayed at 7:00 pm Monday. Visitation will continue on Tuesday from 7:00 am until 9:00 am. Due to Covid-19, the Bodin family requests that family and friends wear face masks and practice social distancing while attending the visitation and funeral service. A resident of Loreauville, Greg was born on April 7, 1968 and was a 1987 graduate of New Iberia Senior High. After graduation, he furthered his education at Copiah-Lincoln Community College, where he also received an athletic scholarship to play baseball. Greg loved spending time with family and friends; he never met a stranger. He volunteered much of his time coaching baseball and softball. When he wasn’t coaching, he was in the stands cheering on his kids. He was a huge LSU fan who never missed a game. Alongside being an avid sports fan, Greg also enjoyed hunting and fishing with his family and buddies. Greg was an entrepreneur as he worked countless hours in the HVAC industry before starting his own successful business, Premier Air Heating and Cooling. Survivors include his wife, Rene Bodin of Loreauville; son, Drake Bodin of Loreauville; two daughters, Kelci Bodin of Loreauville and Karli Bodin of Loreauville; mother, Joyce Morgan Bodin of New Iberia; three brothers, Rusty (Andre) Bodin of New Iberia, Gerald Bodin of New Iberia, and Scotty (Adrienne) Bodin of Lafayette; two sister-in-laws, Hollie Bodin of Delcambre, and Angela LeBlanc of Hope Mills, NC; father and mother-in-law, Jerry and Brenda Gautreaux Gonsoulin of Loreauville; brother-in-law, Darin (Heather) Gonsoulin of Loreauville; special niece and nephew, Misty (Benjamin) Early of Broussard and Kade Gonsoulin of Loreauville; nieces and nephews, Shanna, Tiffany, Katie, Emily, Emma Claire, Jay, Cody, Beau, Eli, & Luke. Greg was preceded in death by his father, Donald Bodin; brother, Ricky Bodin; brother-in-law, Edward LeBlanc; and grandparents, Fernand and Daisy Bodin, Allen and Opal Morgan. Pallbearers will be Timmy Daigle, Ronald Broussard, Kenneth Carrere, Darin Gonsoulin, Marc Lopez, and Benjamin Early. Honorary pallbearers are his brothers, Rusty Bodin, Gerald Bodin and Scotty Bodin. In lieu of flowers, memorial contributions may be made to Greg’s family to help defray medical expenses. Pellerin Funeral Home, 502 Jefferson Terrace Blvd., New Iberia, LA 70560, 337-365-3331.
To order memorial trees or send flowers to the family in memory of Greg Bodin, please visit our flower store.