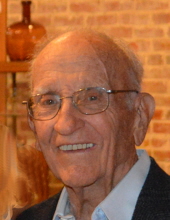 New Iberia - Funeral services will be held at 11:00 am on Tuesday, November 12, 2019, at Pellerin Funeral Home in New Iberia for Jules Gervais (Jake) Patout, Sr., 97, who passed away on Friday, November 8, 2019, in Lafayette. Interment will follow in Memorial Park Cemetery. Rev. Ed Degeyter will officiate. A gathering of family and friends will be Tuesday from 9:00 am until 11:00 am at Pellerin Funeral Home. Jake was born May 3rd 1922, in New Iberia, to Frederick and Evyonne Patout. He was a graduate of St. Peter’s College. Jake was a member of the St. Peter’s College championship five man football team. After high school, like so many young Americans, Jake joined the cause and enlisted in the U.S Air Force. After basic training, Jake was stationed in India with the Chennault Air Force. Jake was a Master Sargent mechanic repairing planes that were flying over “the hump”. On a routine mission to supply the Chinese forces who were engaged in battle with the Japanese, Jake’s transport plane was shot down. Jake and the remaining survivors of the Plane were captured by the Chinese forces. Fortunately, hidden in Jake’s uniform was a booklet containing the numerous translations of the mandarin language which he then used to communicate he and his men’s innocence and was returned safely back to India. At the end of WWII, miraculously Jake and his four brothers who had also served, all made it home to New Iberia. Jake then attended Southwest Louisiana Institute, which is today ULL. He earned a Bachelors degree in the College of Engineering. Jake spent the vast majority of his working years with the Red Fox Company, Jake was a hands on project engineer, a true problem solver. No matter the material, no matter the complexity, Jake could find a solution. Jake was an avid gardner, his summer tomatoes were legendary. He perfected growing local cypress trees from seed, and was called upon by many individuals and institutions to replicate cypress trees of significance. In addition to gardening, Jake was quite the carpenter. If he could design it, he could build it. As a young father, Jake was an avid duck hunter and saltwater fisherman. The family kept their boat at Bayou Jack, which he shared with brothers Eugene, Gerold, and Renee. The Patout cousins all learned to fish, water ski, and enjoy other water sports during their time spent at Bayou Jack. Jake and Mae were summer travelers, they especially enjoyed unique world wide destinations. Just short of fifty years of marriage, Mae was taken after a long fight with cancer. Jake’s life was forever changed. Though the years passed, his love for Mae remained. Jake was the always there grandfather, soccer, baseball, always available to work on projects, to fix whatever may have been broken or to paint whatever needed to be painted. He became the quite strength of the family. Jake was a true southern gentleman, a Christian man, his quite consistency permeated his life. Jake was preceded in death by his father Fredrick, mother Evyonne Southwell, sister Edell Killen, brothers Frederick Patout, Gerald Patout, Edwin Patout, Eugene Patout, Richard Patout, a daughter Mary Lorene Patout, a son Jules G. Jr.“Jeff” Patout, and the love of his life, Frankie Mae Olivier. Jake is survived by a brother Renee Patout, a Son Frederick “Ric” Patout and wife Svetlana, his grandchildren, Kelly Romero (Bart), Brad Patout (Elle), Valerie Hajec (Brad), Angelle Clement (Kyle), Nicholas Patout, and Anastaisysa Gromova, and his great grandchildren Jack Romero, Audrey Romero, and Olivia Mae Hajec. Pellerin Funeral Home, 502 Jefferson Terrace, New Iberia, LA 70560, 337.365.3331 is in charge of the arrangements.
To order memorial trees or send flowers to the family in memory of Jules "Jake" Patout, Sr., please visit our flower store.