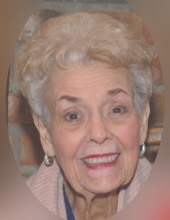 New Iberia - A Funeral Service will be held at 1:00 pm on Saturday, March 20, 2021, at Pellerin Funeral Home of New Iberia in New Iberia for Julia Andrus, 89, who passed away on Sunday, March 14, 2021, in New Iberia. Interment will follow in Rosehill Cemetery. Pastor Paul Fontenot will officiate. A gathering of family and friends will be Saturday from 10:00 am until 1:00 pm at Pellerin Funeral Home. A longtime resident of New Iberia, Mrs. Andrus was born on March 19, 1931 in Shreveport to the late Lawrence and Marguerite Lillie Guilbeau. She was the secretary for the Executive Officer at the New Iberia Naval Base, and had also worked for Hilldenbrand Services and Ronco Crew Boats. Mrs. Andrus enjoyed baking cakes, collecting porcelain birds and flowers, and was a member of the First United Methodist Church, where she served in the Methodist Ladies Ministries and also as Chairman of the Bereaved Families Meals. She is survived by her sons, Larry Andrus (Susan) of New Iberia, and Mike Andrus (Mary Ellen) of New Iberia; daughter, Vickie Sessions of Baton Rouge; four grandchildren, Brandon Andrus (Sara) of Youngsville, Erica Andrus of Baton Rouge, Jason Sessions of Baton Rouge, and Andi Sessions Moffatt (David) of Baton Rouge; three great grandchildren, Bailey Andrus, Madelyn Andrus, and Stevi Moffatt; brother, Dr. L.C. "Bud" Guilbeau (Linda) of New Iberia; sister, Marjorie Guilbeau Middlestadt of Shreveport; and numerous nieces and nephews; . In addition to her parents, she was preceded in death by her husband, Andrew Andrus; sister, Margie Ann Guilbeau; and her son-in-law, Stephen Sessions. Pallbearers will be Larry Andrus, Mike Andrus, Jason Sessions, Brandon Andrus, David Moffatt, and Dr. Robert Lahasky. Honorary pallbearer will be Wilbur Miles. The family would like to give special thanks to the staffs of Garden View and Hospice of Acadiana for their care and compassion. Memorial contributions may be made to the First United Methodist Church, 119 Jefferson Street, New Iberia, LA 70560 or Hospice of Acadiana, 2600 Johnston Street, Suite 200, Lafayette, LA 70503. Pellerin Funeral Home, 502 Jefferson Terrace Blvd., New Iberia, LA 70560, (337-365-3331) is in charge of arrangements.
To order memorial trees or send flowers to the family in memory of Julia Andrus, please visit our flower store.