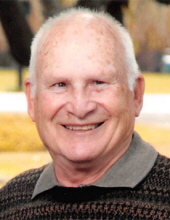 New Iberia – Catholic Burial Rites will be held at 10:00 am Thursday, April 1, 2021 at Holy Family Cemetery in New Iberia for Larry E. Aucoin, 86, who passed away on Saturday, March 27, 2021, in New Iberia. Rev. Ed Degeyter will officiate. Mr. Aucoin was born on November 22, 1934 to the late Lawrence and Adele Aucoin in Manila, Philippine Islands. As a child during World War II, he was held in a prison camp in the Philippine Islands, by the Japanese for 32 months. A 1952 graduate of St. Peter’s College, he attended SLI and served our country in the U.S. Army. Mr. Aucoin was employed by C.H. Fenstermaker for 45 years and was an active member of St. Peter’s Catholic Church, where he served as an usher for over 50 years. He was also an active member of the Knights of Columbus Council 1208, serving in many capacities including Grand Knight for six years. An avid bowler for 45 years, Mr. Aucoin attended the National Bowling Tournament for 30 years, and was secretary for the Oilmen’s Bowling League. He also enjoyed golf, traveling, cruise ships, bus tours, family genealogy, cooking, and was a member of the Ancient Order of Creole Gourmets. Survivors include his wife, Janice Perez Aucoin of New Iberia; five daughters, Karen Hoffpauir (Dwayne) of New Iberia, Diann LeBlanc (Ty) of New Iberia, Mary Landry of New Iberia, Margaret Pellerin of St. Martinville, and Ann Rogers (Jason) of New Iberia; son, Larry Aucoin Jr. (Judy) of Moss Bluff; two sisters, Dorothy Aucoin Broussard (Patrick) of New Iberia, and Sylvia Aucoin Patin of New Iberia; 13 grandchildren, 6 great grandchildren. In addition to his parents, he was preceded in death by his brother, Russell Aucoin; two son-in-laws, Ernest "Joey" Landry, Jr. and Richard Pellerin, Jr.; brother-in-law, Larry Patin. The family would like to give special thanks to Senior Helpers, especially Sierra and to Hospice of Acadiana. In lieu of flowers, memorial contributions may be made to Hospice of Acadiana, 2600 Johnston Street, Suite 200, Lafayette, LA 70503 Pellerin Funeral Home, 502 Jefferson Terrace Blvd., New Iberia, LA 70560 (337-365-3331) is in charge of arrangements.
To order memorial trees or send flowers to the family in memory of Larry E. Aucoin, please visit our flower store.