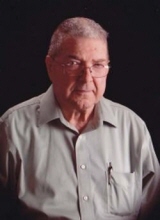 Cecilia - Funeral services will be held at 11 a .m., on Friday, September 9, 2011, at St. Joseph Catholic Church in Cecilia, for LeRoy Alleman, Sr., 83, who passed away on Tuesday, September 6, 2011 at Lafayette General Medical Center. Fr. Michael Delcambre will officiate at the funeral service. Interment will follow at St. Joseph Cemetery. Mr. Alleman honorably served his country for 24 years; serving 12 years in the United States Army and 12 years in the Air Force, during which time he served in World War II, the Korean Conflict, and the Vietnam War. He was a member of the American Legion. Mr. Alleman was a land surveyor who enjoyed his work, as well as taking time off to play a few rounds of golf, and traveling with his loving wife of 59 years, whom he adored. Survivors include his wife, Marie 'Genevieve' Alleman of Arnaudville; one son, Leroy Alleman, Jr. and his wife, Charlene, of Youngsville; three daughters, Deborah McGrath and her husband, Chris, of Los Lunas, NM, Priscilla Angelle and her husband, Will, of Cecilia, and Karen Cummins and her husband, Richard, of West Chester, PA; one brother, Clovis Doucet and his wife, Patty, of Fife, WA; two sisters, Verline 'Dean' Hendon and her husband, Dan, of Sarasota, FL, and Josey Felts and her husband, James, of Nashville, TN; 9 grandchildren and 13 great grandchildren. He was preceded in death by his parents, Aldus and Enola Duplain Alleman; two brothers, Ivy and Morris Alleman; one sister, Theresa Menard; and one great granddaughter, Kristen Elizabeth Cole. The family requests that visiting hours be observed from 11:30 a.m. until 10 p.m. on Thursday and continue on Friday at 7 a.m. until 10:30 a.m. A rosary will be recited at 7 p.m. on Thursday. Pallbearers will be Chris McGrath, Adam Alleman, Lloyd Brasseaux, Jr., Christopher Wyble, Matt Bergeron, and Larson Cole. Honorary pallbearers will be LeRoy Alleman, Jr., Will Angelle, Reggie Hollier, Chris Dugas, Troy Thibodeaux, Gage Cole and Eathan Cole.Memorial donations may be made in his name to the American Diabetes Association, P O Box 11454, Alexandria , VA 22312 . Pellerin Funeral Home of Cecilia is in charge of arrangements. To view on-line obituary, sign guestbook and , go to www.pellerinfuneralhome.com
To order memorial trees or send flowers to the family in memory of Leroy Alleman, please visit our flower store.

Inurnment will follow in the St. Michael Catholic Church Columbarium.