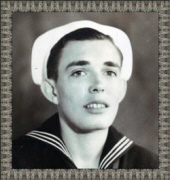 New Iberia - A Mass of Christian Burial will be celebrated at 11:00 AM Monday, March 31, 2008, at St. Peter Catholic Church, in New Iberia for Maxie Joseph Gisclair, 82, who died Friday, March 28, 2008 in New Iberia. Interment will follow in Holy Family Cemetery. A native of Abbeville and longtime resident of New Iberia, Mr. Gisclair retired from Shell Oil Co. A veteran of World War II, he proudly served our country in the U.S. Coast Guard. He was a member of St. Peter Catholic Church, where he was a former supervisor of Religions Education, and a former head usher for the 12 oclock Mass. Mr. Gisclair is also a former member of the Vigil Society of St. Peter's and the Rosary Group at Sacred Heart, and is a Past Grand Knight and financial secretary of the Knights of Columbus Council 1208 in New Iberia. A member of the VFW, he served as commander of the VFW in Abbeville, as secretary/treasurer of the New Iberia Shell Pensioners Club, and is a former chief counselor of the Columbian Squires. Mr. Gisclair was a player agent and was a very active worker in the Evangeline Little League. He was honored in 1989 and 2007 for his dedication and service. Survivors include his wife Annie Romero Gisclair of New Iberia; sons, Paul Gisclair and wife Anastasia of Broussard, Charles Gisclair and wife Mary Kay of Coteau; daughter, Maxine Worsham and husband Dennis of New Iberia; grandchildren, Andrew Gisclair, Alex Gisclair, Matthew Worsham, Timothy Worsham, and Blake Gisclair. He was preceded in death by his parents Oneziphor and Leonie Gisclair; brother, Francis Gisclair; sisters, Lillian Meaux, Anita Gisclair, Eulisie Frederick, and Mazie Gisclair. Pallbearers will be Charles Gisclair, Matthew Gisclair, Andrew Gisclair, Dennis Worsham, Ricky Meaux, and Scott Girouard. Honorary pallbearers will be Blake Gisclair and Robert Gisclair. A gathering of family and friends will be Sunday, from 2:30 PM until 9:00 PM at Pellerin Funeral Home, 502 Jefferson Terrace Blvd, in New Iberia. A rosary will be prayed at 6:00 PM Sunday. Visitation will continue Monday from 8:00 AM until 10:30 PM at the funeral home. The family would like to express their sincere appreciation to Hospice of Acadiana for the extraordinary and compassionate care given to Mr. Gisclair. Memorial contributions may be made to Hospice of Acadiana, 2600 Johnston Street, Suite 200, Lafayette, LA. 70503. Pellerin Funeral Home, 502 Jefferson Terrace Blvd, New Iberia, 365.3331, is in charge of arrangements.
To order memorial trees or send flowers to the family in memory of Maxie Gisclair, please visit our flower store.