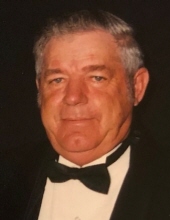 Breaux Bridge - A Funeral Service will be held at 2:00 pm on Monday, November 30, 2020, at Pellerin Funeral Home of Breaux Bridge for Paul Huval, 77, who passed away on Wednesday, November 25, 2020, at his residence surrounded by his family. The family requests that visiting hours be observed at the funeral home from 9:00 am until 2:00 pm on Monday. Deacon Butch will officiate at the Funeral Service. Interment will follow at St. Bernard Cemetery No. 2 in Breaux Bridge. A resident of Duson most of his life, Paul was a loving husband, father, grandfather, great grandfather, brother and friend to all. He was a hard working man who worked to provide a good living for his family. He worked for Hilton Boyer Construction, Well Tech, Inc., Pride Well Service, Moncla, Great Southern, and P&P Transportation (as owner/operator) which he was known as "Charlie Horse" to many as his CB name. Paul was a horseman and loved shoeing, breaking and training horses. He was the son of a farmer who was taught, hard work always pays off. Paul loved working with his hands and built several pieces of furniture for his home and the home of others. He will be remembered for his witty personality and for the man who would do almost anything you asked of him. He will be sadly missed by his family and friends. He is survived by his wife of 56 years, Theresa R. Huval of Duson; two sons, Johnny (Christine Toney) Huval of Duson and Joseph (April Albert) Huval of Rayne; daughter, Peggy J. (Henry J.) Mehrtens of Metarie; brother, Steve (Alta Knott) Huval of Arnaudville; sister, Velma H. Poirier of Breaux Bridge; seven grandchildren, Ilayna Krysten Mehrtens, Karli Domenica Mehrtens, Henry Joseph Mehrtens, III, Johnny Paul Huval, Jr., Jordan Matthew Huval, Logan Joseph Huval, and Kalie Elizabeth Huval; one great grandchild, Ariel Faith Savoie; two brothers-in-law, Shirby Blanchard of Breaux Bridge and Dutel Delahoussaye of St. Martinville; and two sisters-in-law, Janice Boudreaux Huval of Breaux Bridge, and Oline Scrantz of Cecilia. He was preceded in death by his parents, Clodis Paul and Anita Huval; brothers, Ernest Huval and Roland Huval; brothers-in-law, Hilton Boyer, Wilfred Poirier and Allen Delahoussaye; sisters, Loula Mae "Loon" Huval Delahoussaye, Lois Huval Blanchard, Mable Huval Boyer, Margaret Huval and Georgia Huval Delahoussaye; and a grandchild, Brandon Broussard. Pallbearers will be Johnny Huval, Joseph Huval, Johnny Huval Jr., Logan Huval, Henry Mehrtens, Jr. and Henry Mehrtens, III. Pellerin Funeral Home of Breaux Bridge, 211 Berard St., Breaux Bridge, LA 70517, (337-332-2111) is in charge of arrangements.
To order memorial trees or send flowers to the family in memory of Paul Huval, please visit our flower store.