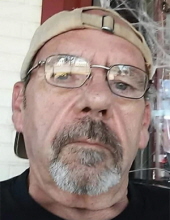 New Iberia - Private services will be held at a later date for Steven Moore, 62, who passed away on Sunday, May 31, 2020, in New Iberia. A native and resident of New Iberia, Steven was born on September 25, 1957 to the late Wayne Daniel Moore, Sr. and Elva Marie Davis Moore. He worked in the oilfield for many years and he enjoyed riding his motorcycle, fishing, and cooking. He will be dearly missed by everyone. Survivors include brothers, Wayne "Danny" Moore, Jr. of New Iberia, Charles Moore and wife Theresa of New Iberia, Patrick Moore of Northport, Alabama; sisters, Terry Hays and husband Phillip of Salem, Illinois, Janet Broussard of Crowley; step son, Chris Aucoin of New Iberia; half-brother, Christopher Moore of Lafayette; step mother, Marion Moore; step brothers, Craig Nowell, Paul Nowell and wife Robin of New Iberia; several nieces and nephews; and his beloved dogs, Biscuit and Pepe. In addition to his parents, he was preceded in death by his wife, Kathy Voorhies Moore; and a brother, Michael Moore. Pellerin Funeral Home, 502 Jefferson Terrace, New Iberia, LA 70560, (337-365-3331), is in charge of the arrangements
To order memorial trees or send flowers to the family in memory of Steven Moore, please visit our flower store.