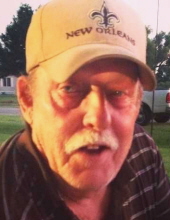 New Iberia - Funeral services will be held at 6:00 pm on Wednesday, September 11, 2019, at Pellerin Funeral Home in New Iberia for Wilton Touchet, 67, who passed away on Sunday, September 1, 2019, in West Monroe. Interment will be at a later date. Rev. Keith Landry will be officiating. A gathering of family and friends will be Wednesday from 4:00 om until 9:00 pm at Pellerin Funeral Home. A rosary, led by the Men’s Rosary Group, will be prayed at 7:00 pm Wednesday. A native and longtime resident of New Iberia, Mr. Touchet was born on November 4, 1951 to the late Lawrence Touchet and Lillie Mae Dore. He worked for the City of New Iberia and T&B Grocery, and was very good building things with his hands. Mr. Touchet was known affectionally by his nieces and nephews, who he spoiled often, as “Cool Uncle Doc”. He is survived by his brothers, Whitney "Willie" Touchet and wife Lorena of New Iberia, Michael Gary and wife Lisa of New Iberia and Scotty Touchet of New Iberia; brother-in-law, Stanley Benoit of New Iberia; sisters, Brenda Henry and Walter of Coteau, Julia Maturin and husband Gerald of New Iberia, Charlene Kern and husband Merlin of New Iberia, Patricia Dutile of New Iberia; several nieces and nephews. In addition to his parents, he was preceded in death by a sister, Eunice Benoit; brother, Keith Touchet; twin brother, Wilson Touchet; brothers, Douglas Touchet, and Joseph Touchet; step mother, Beverly Alleman; and nephews, Jared Maturin and Michael Gary, Jr. Pellerin Funeral Home, 502 Jefferson Terrace Blvd., New Iberia, LA 70560, (337-365-3331) is in charge of arrangements.
To order memorial trees or send flowers to the family in memory of Wilton Touchet, please visit our flower store.