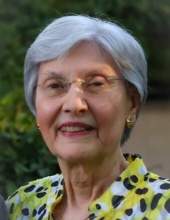 New Iberia – A Mass of Christian Burial will be celebrated at 10:00 am Saturday, May 15, 2021 at St. Peter’s Catholic Church for Mary Amanita Robin Lamperez, who passed away early Monday morning at peace with her family at home, succumbing to an aggressive ovarian cancer. She was 90 years old.Rev. Ed Degeyter will be the Celebrant.Entombment will follow in St. Peter’s Cemetery.A gathering of family and friends will be Friday from 5:00 pm until 8:00 pm at Pellerin Funeral Home. A rosary, led by the Men’s Rosary Group, will be prayed at 7:00 pm on Friday. Visitation will continue on Saturday from 8:00 am until 9:30 am.Amanita was the daughter of the late George Wikoff Robin and Amalita Bernard Robin of Jeanerette. She fondly reminisced of her growing up in Jeanerette with all her neighbors, friends and classmates – some of whom became lifelong friends. She was always so proud of her Jeanerette roots. Most of all, were her recollections of her immediate and extended family; her home was always filled with care and true concern as well as an amazing culture of family closeness and genuine love that she carried to the end. She could go on for hours with loving stories about her Aunts and Uncles. She certainly had more than a few tales about her Aunt Hilda Mequet (and her husband, Carmen) –her earliest travel companions; what family trips they had!Amanita attended SLI and graduated with a degree in Home Economics. While at SLI another chapter of close friends and constant engagement with her collegiate community was started (and again continued with lifelong friends, experiences, and stories). Oh, the stories she has told related to her classes, on-campus and dormitory living, her sorority, and her beloved “Red Jackets”.Amanita went on to teach Home Economics for a few years and worked for the Welfare department, at which time she met Gus Lamperez, Jr., who would be her husband and love of 62 years. They married in Jeanerette on May 9, 1959. Amanita devoted and dedicated her life to her family; she gave birth to 3 sons: Gustave Oscar Lamperez III (Tave), George Wikoff Lamperez, and Alfred John Lamperez. She supported and was so engaged with their lives and endeavors – elementary school, high school, Scouting, swimming, canoeing, science fairs, speech & debate, basketball, baseball, whatever was needed: driver, cheerleader, proof-reader, she was there, and asking what more she could do.She always wanted to know what was going on in her childrens’ lives – again that true concern she had grown up with, from her loving extended family.Amanita and Gus had a small close group of family friends – their “supper club” with whom they frequently met and ate and had extended social gathering over decades—another group of personalities, loved ones and experiences who would become and whose children remained lifelong friends.Amanita and Gus were able to travel a fair amount and they captured and recounted tales from those trips as well. Those travels continued and escalated once their children left New Iberia for college -all graduated from their alma mater – University of Southwestern Louisiana (now University of Louisiana – Lafayette). Of course, Gus and Amanita travelled more to see each of their sons with numerous trips to Illinois and Georgia as well as Slidell to continue to catch up on their lives and livelihoods.The next significant chapter in Amanita’s life was a 13 year journey, beginning in January, 2007. She and her husband, Gus were able to relive, communicate and share each other’s unique histories and stories while they reviewed each others’ lives while students in a Life Writing class delivered by UL at the Iberia Parish Library. Every Wednesday was another chance to share a tale, a loved one, an inspiration, a fond trip, and so much more. Oh, how she loved to research and recall to prepare her stories and share them with her classmates (friends). If that wasn’t enough, she bound 3 volumes each of their work to share with her children and grandchildren – so they could know what she (they) knew and experienced. What a treasure and family legacy to supplement her nearly 40 years of genealogy work that she collected on Robins, Romeros, Lamperez’s, Wikoffs, Bernards and the collective family trees.She was preceded in death by her parents George Wikoff and Amalita. Her survivors include: her husband Gustave Oscar Lamperez, Jr.; her children: Gustave (Tave) and his wife Janet Perry, George and his wife Terri, Alfred and his wife Stephanie; grandchildren: William and his wife Madison, Kyle and his fiancé Sophia; stepgrandchildren: Alexandra Badeaux and Nicholas Badeaux.Pallbearers will be Matthew Delcambre, Douglas Delcambre, William Lamperez, Kyle Lamperez, Paul Delcambre and Scott Girouard. Honorary Pallbearers are Dr. Edmond (Eddie) Lamperez and Jay Robin.In lieu of flowers, please give donations to the University of Louisiana at Lafayette (General Fund)Pellerin Funeral Home, 502 Jefferson Terrace, New Iberia, LA 70560, 337.365.3331<iframe class="ts_player" allowfullscreen="true" allowtransparency="true" allow="autoplay; fullscreen" frameborder="0" height="330" scrolling="no" src="https://www.tributeslides.com/videos/embedded_video/J2TFBSJ4XKBK5PPM" width="512"></iframe>
To order memorial trees or send flowers to the family in memory of Amanita Robin Lamperez, please visit our flower store.