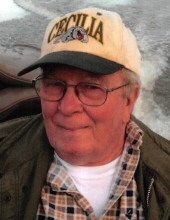 Cecilia - A Mass of Christian Burial will be celebrated at 9:00 am on Monday, December 9, 2019, at St. Joseph Catholic Church in Cecilia for Amilcar "Mickey" Guidry, 81, who passed away on Saturday, December 7, 2019, at Lafayette General Medical Center. The family requests that visiting hours be observed at the funeral home from 7:00 am until time of service on Monday. A rosary will be prayed at 8:00 am on Monday. Rev. Gregory Cormier will officiate at the Mass of Christian Burial. Reader will be Renella Shelby. Interment will follow at St. Joseph Cemetery in Cecilia. Amilcar, better known as, "Mickey," was born August 15, 1938 in St. Martin Parish. Fifteen years ago, he "robbed the cradle" and married his dear wife, Deborah. Mickey honorably served and retired in the United States Army and was also a member of the American Legion. He enjoyed being on the water and spending time with his family, especially his great grandchildren. Mickey will be dearly missed. He is survived by his loving wife, Deborah Calais Guidry; daughters, Lorrie Guidry and Lena Guidry; son, Timothy Guidry; eight grandchildren; and seven great grandchildren. He was preceded in death by his father, Murphy Guidry; mother, Solange Theriot Guidry; first wife, Jane Guidry; and one brother, Ulinore "UU" Guidry. Pallbearers will be Michael Guidry, Ray Champagne, Damian Courville, Nick Potier, and Bryson Guidry. Pellerin Funeral Home of Cecilia, 2238 Bushville Hwy., Cecilia, LA 70521, (337-332-2111) is in charge of arrangements. To view on-line obituary, sign guestbook and view video tribute, go to www.pellerinfuneralhome.com
To order memorial trees or send flowers to the family in memory of Amilcar "Mickey" Guidry, please visit our flower store.