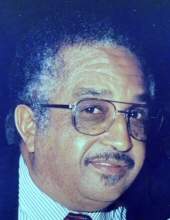 Breaux Bridge - A Mass of Christian Burial will be celebrated at 10:30 am on Saturday, May 22, 2021, at St. Francis of Assisi Catholic Church in Breaux Bridge for Andrew LeBlanc, Sr., 85, who passed away on Sunday, May 16, 2021, at St. Martin Hospital.The family requests that visiting hours be observed at the funeral home from 5:00 pm until 9:00 pm on Friday and continue on Saturday at 7:00 am until 10:00 am. A rosary will be prayed at 6:00 pm on Friday.Rev. Ugochukwu Jerome Cletus SSJ will officiate at the Funeral Mass. Readers will be Andrew J LeBlanc III and Pam Fontenette-Simon. Interment will follow at St. Francis of Assisi Cemetery in Breaux Bridge. Andrew Joseph LeBlanc, the third child of the late Noelie Lewis LeBlanc and Leonard LeBlanc. Andrew LeBlanc was born May 28, 1935 in Breaux Bridge, Louisiana. He answered the Lord’s call on Sunday, May 16, 2021. He attended St Francis of Assisi Catholic School and went on to Carver High School. After completing his education, Andrew honorably served his country in the United States Army. After his service, he married is sweetheart, Renella "Sue" Fontenette of Breaux Bridge, his best friend, and lifelong companion of 63 years. To this union came Andrew LeBlanc Jr. In 1973 he had a steadfast career working as a crane operator for Shell Oil where he later retired after 25 years. Andrew had a loving devotion to his wife and son; his 3 grandchildren Andrew Joseph LeBlanc, III, Andre' Isaac LeBlanc and Amber Jonae Nicole LeBlanc; and one daughter-in-law Rachel Malveaux LeBlanc.Andrew was an intelligent, well-rounded person who will always be remembered for his sense of humor, his mischievous teasing, and his canny ability to always have a nickname for those he loved so dearly. He also had an enormous love for sports, fishing, and gardening. Enjoying a big bowl of ice-cream while sitting in his chair is where we all could find him on any given day. And if children were around, he was sure to be holding one with that BIG smile we all loved to see. His interests were a life of service as a faithful parishioner of St. Francis of Assisi Catholic Church. He was a Lay Minister of Communion, and he dedicated 69 years as an Usher, 20 years of that was serving on the cemetery committee. He was instrumental in getting the marquee in front of the church placed along with the Holy Family statue and he helped with the church fair annually. His endless commitment to the priests and others needing any type of church service was his joy. Andrew also served as a commissioner on the Breaux Bridge Housing Authority for over 20 years.Andrew is also survived by one sister, Mary Alice LeBlanc Crockett, several in-laws, and a host of nieces, nephews, cousins, and many friends.Andrew is preceded in death by his parents Leonard and Noelie Leblanc, one brother, Ivan J. LeBlanc Sr., two sisters Mary Ann LeBlanc and Carol LeBlanc Potier, one nephew, Ivan J. LeBlanc II, and two nieces, Sara Mae LeBlanc Nixon and Torrie Mona Ann Roy. Pallbearers will be Donovan Potier, Paul Potier III, James Pentard Jr., Edward Fontenette Jr., Roger Fontenette, and Derrick Fontenette.Honorary Pallbearers will be Hayward Lewis, Clarence Lewis Jr., Daniel Derousselle, Sr., Donald Gale Sr., Lester Fontenette Sr., and John Fontenette.Pellerin Funeral Home of Breaux Bridge, 211 Berard St., Breaux Bridge, LA 70517, (337-332-2111) is in charge of arrangements.<iframe class="ts_player" allowfullscreen="true" allowtransparency="true" allow="autoplay; fullscreen" frameborder="0" height="330" scrolling="no" src="https://www.tributeslides.com/videos/embedded_video/XYJ2XL5HL269NSL2" width="512"></iframe>
To order memorial trees or send flowers to the family in memory of Andrew LeBlanc, Sr., please visit our flower store.