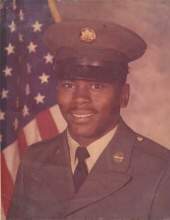 Breaux Bridge - A Mass of Christian Burial will be celebrated at 10:30 am on Friday, September 24, 2021, at St. Francis of Assisi Catholic Church in Breaux Bridge for Andrew "Mudley" Batiste, 62, who passed away on Friday, September 17, 2021, at Belle Teche Nursing Home.The family requests that visiting hours be observed at the funeral home in Breaux Bridge from 7:00 am until 10:00 am on Friday.A rosary will be prayed at 8:00 am on Friday.Interment will follow at St. Francis of Assisi Cemetery in Breaux Bridge. Andrew, known to many as, "Mudley", was born February 28, 1959. He was a graduate of Breaux Bridge High - Class of 1977, where he played football. He enlisted in the United States Army in 1978, and honorably served his country until his discharge in 1983. Mudley worked as a carpenter for many years. He used his talent in carpentry to help others that needed. As a pastime, he enjoyed attending Breaux Bridge High football games, playing Pick 3 lottery tickets, and visiting with his family and friends. He will be dearly missed. He is survived by his son, Andrew Batiste, Jr.; brothers, Henry Batiste and John J. Batiste (Kimberly); sisters, Mary Lee B. Lewis, Ethel B. O'Bannon, and Anna B. Storrs (Lonnie); and a host of nieces and nephews.He was preceded in death by his parents, John Batiste, Jr. and Lorencia LeBlanc Batiste; wife, Stephanie Denise Batiste; and brothers, Leroy Alexander and Harris Batiste. Pallbearers will be John J. Batiste, Elijah Lewis, Shawn Lewis, Isaiah Lewis, Xavier Lewis, and Courtlon Cyprien.Pellerin Funeral Home of Breaux Bridge, 211 Berard St., Breaux Bridge, LA 70517, (337-332-2111) is in charge of arrangements.
To order memorial trees or send flowers to the family in memory of Andrew "Mudley" Batiste, please visit our flower store.