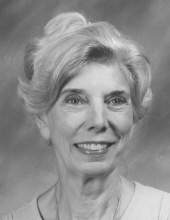 “Well done, my good and faithful servant.” Matthew 25:21New Iberia - A Mass of Christian Burial will be celebrated at 1:00 pm on Monday, July 19, 2021, at St. Peter's Catholic Church in New Iberia, for Ann Weathersby Clasen, 87. Ann suffered a hemorrhagic stroke on July 9, 2021 and passed away peacefully at home in New Iberia on Friday, July 15, 2021 surrounded by her loved ones.The Reverend Jude A. Halphen, PhD, will be the celebrant. The Reverend Nathan Comeaux will concelebrate. Patrick Viator and Michael Viator will altar serve the Mass.A gathering of family and friends will be held at St. Peter's Catholic Church from 11:30 am until 1:00 pm on Monday. A rosary, led by the Sisters of the Heart of Jesus, will be prayed at 12:00 pm on Monday. Entombment will follow at Holy Family Cemetery in New Iberia.Ann was born on May 3, 1934 in New Iberia, LA to Walter and Yvette Weathersby. Having lost her father at 5 years old, Ann was raised by her mother along with her 2 brothers in their New Iberia City Park home built by her father. She lived on the tennis courts in the park and became a very good player. Her mother instilled in her both a strong independence and work ethic along with a deep seated Catholic faith which became the cornerstone of her very being and which she devotedly passed along to her children, grandchildren, relatives, and anyone she met. She loved Our Lord and Our Lady deeply. She lived her faith most importantly through her generosity of love, laughter, time, and resources to anyone in need always putting others first.After graduating from USL in Education, Ann taught at Dodson Elementary School in New Iberia before moving to Pensacola, FL with her best friend, Marie. On their first night in Pensacola, Ann met her beloved husband of 61 years, Lt. Col. Darcy Lee Clasen (USMC, ret.) at a drive-inn while Darcy was in flight school there. Darcy and his buddy eyed Ann and Marie and flipped a coin to see which girl they would each approach; well, Darcy got Ann and that chance meeting began a life long journey of faith, love, loyalty, and sacrifice. Together, Ann and Darcy were blessed with 4 beautiful children, Tim, Tom, Christian, and Angela.Ann was the pillar of strength serving as the wife of a Marine pilot for almost 30 years while serving her vocation as a wife and mother and working as a teacher wherever they lived. Darcy served combat operations in Vietnam taking him away from her and their young boys for 39 months. They were stationed in California, Okinowa, and Virginia and moved back to her hometown of New Iberia after Darcy’s retirement in 1984. It is here that she embarked on her second career as a real estate agent having worked for both Century 21 and Caffery Real Estate. She was a member of Our Lady of Perpetual Help where she was a lector, homebound minister, and CCD teacher and later joined St. Peter’s Catholic Church to join her daughter’s family there. Throughout her 87 years, Ann enjoyed running, gardening, cooking, art and music, playing cards, making her famous pina colada cake, decorating for holidays, walking in the park, volunteering at church, and sharing a good glass of wine while laughing with friends and family.Left to cherish Ann’s memory is one daughter, Angela Mary Clasen Viator (Jason) of New Iberia and their five children, Nicholas, Patrick, Christina, John, and Michael; three sons, Timothy Paul Clasen (Lisa) of Alexandria, Virginia and their four children, Matthew (Rachel), Rachel, Rebecca, and Jacob; Lt.Col. Thomas Matthew Clasen, USMC, Ret. (Shannon) of Stafford, Virginia and their two daughters, Brianne and Kailey; and Christian Michael Clasen (Dodie) of Brookhaven, Georgia and their daughter, Ann Marie; one brother, Patrick Weathersby (Carol) of New Iberia, one brother-in-law, Douglas Michael Clasen (Niva) of Reno, Nevada, one former sister-in-law, Jonnie Melillo Clasen of Columbus, GA, one sister-in-law, Donna Clasen Smith-Pedder of Jacksonville, Florida; numerous nieces and nephews including Crystal DeMoura (Rene’), Lori Dartez (Lance), Raine Zaunbrecher, D. Michael Clasen, Jr., Todd Patrick Weathersby, D. Brad Weathersby, and Clete, Steve, and Tris Smith; lifelong friends, Sue Standish of Santa Barbara, CA, Marie Bassin of Parrish, FL, and Tonya Lipman of Baltimore, MD, and many other dear friends she made over the years through the military, teaching, church, and real estate.She was preceded in death by her husband, Darcy, her parents, Walter Ray Weathersby and Yvette Froment Weathersby, by one brother, Walter Ray Weathersby, Jr., by her cousin, Dudley Marie, and by her aunt, Zella Marie.Pallbearers will be Jason Viator, Nicholas Viator, John Viator, Timothy Clasen, Thomas Clasen, and Christian Clasen. Honorary pallbearers will be Matthew Clasen, Jacob Clasen, Todd Weathersby, Brad Weathersby, Patrick Weathersby, D. Michael Clasen, D. Michael Clasen, Jr., Clete Smith, Steve Smith, and Tris Smith.The family would like to extend their heartfelt appreciation to Vera Lewis for being God’s hands and feet on earth in helping take extraordinary care of both Ann and Darcy; to Grace Home Health, Checkup Medical, Kenneth McCarron, MD, and Hospice of Acadiana for wonderful care and compassion; to Father Nathan Comeaux for his beautiful anointing of her; and to the Sisters of the Heart of Jesus for their daily visits, rosaries, and support for the family.In lieu of flowers, memorial contributions may be made to Alzheimer's Association, PO Box 96011, Washington, DC 20090-6011 (alz.org) or to the Fellowship of Catholic University Students (FOCUS), PO Box 17408, Denver, CO 80217 (focus.org). Pellerin Funeral Home, 502 Jefferson Terrace Blvd., New Iberia, LA 70560 (337-365-3331) is in charge of arrangements.<iframe class="ts_player" allowfullscreen="true" allowtransparency="true" allow="autoplay; fullscreen" frameborder="0" height="330" scrolling="no" src="https://www.tributeslides.com/videos/embedded_video/5BN38G8848YHSJTL" width="512"></iframe>
To order memorial trees or send flowers to the family in memory of Ann Weathersby Clasen, please visit our flower store.