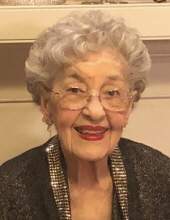 New Iberia - A Mass of Christian Burial will be celebrated at 10:00 AM Monday, April 12, 2021 at St. Peter Catholic Church in New Iberia for Anna Dugas Norris, 98 who died Wednesday April 7, 2021 at her home in New Iberia surrounded by family. Interment will follow in St. Peter’s Cemetery. Rev. Keith Landry will be the Celebrant. A gathering of family and friends will be Sunday from 4:00 pm until 8:00 pm at Pellerin Funeral Home. A rosary, led by the Men’s Rosary Group, will be prayed at 5:30 pm Sunday. Visitation will continue on Monday from 8:00 am until 9:30 am. Born on January 28, 1923 in New Iberia (Coteau). She graduated from New Iberia High as valedictorian of her class in 1941. During World War II she worked for the State of Louisiana distributing war ration stamps. She also was employed by LeBlanc and Broussard Automotive. She was secretary to Lt. Governor Emile Verret and worked in Baton Rouge during the Legislative sessions. She became a Legal secretary and worked for the Law firm of Provost and Ernest of New Iberia. She also worked as Election Commissioner for many years and couldn’t wait for elections to come around. In 1962 Anna and her husband Otto started their own mechanic and service station known as Norris Gulf on Weeks St. Anna was also known for all of her notary work she performed over the years and the hundreds of automobile transactions she handled. Anna loved to work in the yard and crocheting was her favorite past time. There wasn’t a Christmas that went by that the children, grandchildren or the great children didn’t get some type of crocheted item. Either blankets or slippers, and if you had something crocheted, you knew it came from Granny. Her greatest joy was being with or visited by the grandchildren and most of all the great grandchildren. She is survived by her four children; Robert (Bobby) Norris and wife Susan, Patrick (Pat) Norris and wife Lisa, Nancy Bonin and husband Hayward (Moose), and Mary Young and husband Kent. 12 grandchildren, Robby Norris, Michael Norris, Anthony Norris, June Bourque, Jonathan Norris, Brad Norris, Brian Norris, Misty Romero, Renee Bonin, Ryan Bonin, Philip Young and Stuart Young, and 19 great grandchildren. She was preceded in death by her Husband Otto Norris of 72 years, her parents Avery Dugas and Eronie Lopez Dugas. Her siblings, Alden Dugas, Rena Babineaux, Regina Chaffin and Gilbert Dugas. Pallbearers will include Jonathan Norris, Brad Norris, Brian Norris, Robby Norris, Michael Norris, Anthony Norris and Ryan Bonin. Scripture readers are Philip Young and Stuart Young. Gift bearers are June Bourque, Misty Romero and Renee Bonin. The family would like to give thanks to the Heart of Hospice for the care and services provided. Special thanks to caregiver Myesha Alexander. In lieu of flowers, donations can be made in honor of Anna Norris to St. Jude’s Children’s Hospital. Pellerin Funeral Home, 502 Jefferson Terrace, New Iberia, LA 70560, (337-365-3331) is in charge of arrangements
To order memorial trees or send flowers to the family in memory of Anna Dugas Norris, please visit our flower store.