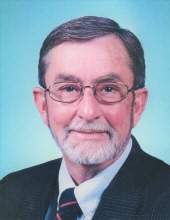 Rynella - A Mass of Christian Burial will be Celebrated at 9:30 am on Thursday, October 3, 2019, at St. Marcellus Catholic Church in Rynella for Arthur Wayne Horton, 71, who passed away on Saturday, September 28, 2019, in Lafayette. Entombment will follow in the church mausoleum, with Military Honors by the Iberia Honor Guard. Rev. Ed Degeyter will be the Celebrant. A gathering of family and friends will be at Pellerin Funeral Home in New Iberia from 3:00 pm until 9:00 pm on Wednesday, and will continue on Thursday from 8:00 am until 8:45 am. A rosary, led by the Men's Rosary Group, will be prayed at 7:00 pm on Wednesday. A longtime resident of Avery Island, Arthur Wayne Horton was born in Fitzgerald, Georgia on October 22, 1947. He proudly served our country in the U.S. Navy as a Machinist's Mate during the Vietnam Era. He was a member of the VFW, American Legion, and St. Marcellus Catholic Church. He worked in oilfield sales prior to retirement. He enjoyed fishing, but gardening was his passion, and his yard was a testament to his love of flowers. Wayne was a loving husband, father, grandfather, brother, uncle and friend who will be deeply missed. Mr. Horton is survived by his loving wife of 45 years, Gwen Richard Horton; daughter, Katherine Broussard and husband John of New Iberia; son, Kevin Horton and wife Stacey of Avery Island; grandchildren, Kelsie and Ian Broussard of New Iberia, and Taylor Horton of Avery Island; a brother, Daniel Horton and wife Judith of Pomona Park, FL; and a sister, Peggy Quinlan and husband William of Loreauville. He was preceded in death by his father, Arthur J. Horton; and his mother, Doris Cobb Luke. Pallbearers will be Ian Broussard, Craig Lopez, Casey Lopez, Christopher Prioux, Nicholas Pommier, and Josh Dartez. Honorary pallbearers will be Chase Rodgers, Ronnie Prioux, Gil Pommier, Mike Flash, Tim Romero, Greg Fortmayer, William O. Quinlan, and Jason Quinlan. Pellerin Funeral Home, 502 Jefferson Terrace Blvd., New Iberia, LA 70560, (337-365-3331) is in charge of arrangements.
To order memorial trees or send flowers to the family in memory of Arthur Wayne Horton, please visit our flower store.