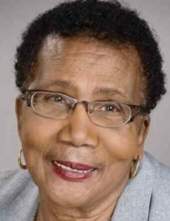 Breaux Bridge - A Mass of Christian Burial will be celebrated at 11:00 am on Saturday, April 17, 2021, at St. Francis of Assisi Catholic Church in Breaux Bridge, LA for Beatrice A. Celestine. The family requests that visiting hours be observed at the funeral home from 7:00 am until 10:30 am. A rosary will be prayed at 8:30 am on Saturday. Interment will follow at St. Francis of Assisi Cemetery in Breaux Bridge. Beatrice Alexander Celestine a devoted wife, mother, grandmother, great grandmother, sister, aunt, cousin, and friend passed from this earthly life on April 7, 2021, after 86 beautiful years of spreading love, wisdom, and joy to everyone that she encountered. Born on August 5, 1934, as the eldest of 12 children to the late Solange and Clarence Alexander Sr. of Breaux Bridge, Louisiana. Beatrice was a product of catholic school but had to stop before graduating to assist her parents financially. She fell in love and was married for 41 years to her husband Milton Celestine Sr. until his death in 1991. To this this union, 8 beautiful children were born (7 sons and 1 daughter) – Lawrence, Clarence, Shelton, Rita, Milton Jr., Ronald, Randy, and Patrick. Beatrice retired from the State of Louisiana as Community Aid Nutrition Specialist. This job along with managing our family night club business were ideally suited for her great ability to communicate effectively with everyone. Beatrice, to put it simply, was a talker and there was no such thing as a brief conversation with her. You can say as many times as you like, Bea, I cannot stay long and just wanted to stop by for a few minutes to say hello. An hour or so later, you were still there, and she was still talking and just warming up. She loved her church and made sure she attended her mass typically on Saturday evenings every week unless she was traveling or extremely ill. She served tirelessly on various church ministries and wherever she was needed. However, she really enjoyed the ministries that focused on servicing others like cooking, cleaning, sweeping, and mopping the sanctuaries. We were always impressed with how she took great pride in the number of years that she assisted the priest by cleaning and ironing the linen used to celebrate the eucharist during Mass. Other than the Lord, Beatrice’s greatest joy was the time that she devoted to her family who she loved immensely and took great pride in seeing them succeed and overcoming whatever obstacles they encountered. Beatrice’s favorite hobby was playing Bingo wherever there was a good bingo game, especially if it had a nice size jackpot prize. It didn’t matter if it was close by or required driving a few miles to get there. She also enjoyed playing cards for a small wager with family and friends. Her other hobbies included music, dancing, watching soap operas like The Young & Restless and old movies especially those private eye shows from the ‘70s, game channels with Family Feud being her absolute favorite. Beatrice leaves to cherish her memory: sons, Lawrence Celestine (Mandy), Clarence Celestine (Marie), Shelton Celestine (Barbara), Milton Celestine, Jr. (Angelina), all of Breaux Bridge, Ronald Celestine (Stephanie) of Cypress, TX, and Patrick Celestine (Cynthia) of St. Martinville; daughters, Tiffany Alexander (Andre') and Keaha Alexander (Ambrose); daughter-in-law, Lena Celestine; brothers, Francis Alexander (Anna Belle), William Alexander (Joycelyn), Albert Alexander (Druscella), Marshall Alexander, Clarence Alexander, Jr. (India) and Ozer Alexander (Martha); sisters, Willie Mae Jean Batiste, Eula Cormier (Lamar) and Marie Bryant (Dwight); Goddaughter Jessica Celestine, 22 grandchildren; and numerous great-grandchildren, nieces and nephews. Beatrice was preceded in death by her husband, Milton Celestine, Sr.; father, Clarence Alexander, Sr.; mother, Solange Alexander; son, Randy Celestine; daughter, Rita Alexander; grandchildren, Katrice Celestine, Chanel Celestine, Patrice Celestine, and Brandon Celestine; brothers, Wildon Alexander and Wilbert Alexander; in-laws, Joseph & Danez Celestine, Annabelle & Emile Roberts, Sr. and Edwin Jean Batiste, Sr. Pallbearers will be Tiylon Alexander, Dwayne Celestine, Jehliel Celestine, Marcus Celestine, Patrick Celestine, Jr., and Quinton Mitchell. Honorary pallbearers will be Jabyron Alexander, Kendrick Ames, Shelton Ames, Derrick Celestine, Dominic Celestine, Jordan Celestine, Ronald Celestine, II and Jayden Mitchell. Pellerin Funeral Home of Breaux Bridge, 211 Berard St., Breaux Bridge, LA 70517, (337-332-2111) is in charge of arrangements. To view on-line obituary, sign guestbook and view video tribute, go to www.pellerinfuneralhome.com
To order memorial trees or send flowers to the family in memory of Beatrice A. Celestine, please visit our flower store.