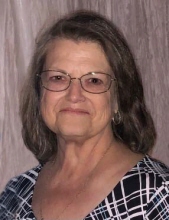 Breaux Bridge - A Mass of Christian Burial will be celebrated at 12:30 pm on Wednesday, January 13, 2021, at St. Bernard Catholic Church in Breaux Bridge for Becky C. Cormier, 60, who passed away on Sunday, January 10, 2021, at Ochsner Lafayette General Medical Center. The family requests that visiting hours be observed at the funeral home from 8:30 am until 12:00 pm on Wednesday. A rosary will be prayed at 11:00 am on Wednesday. Rev. Garrett McIntyre will officiate at the Funeral Mass. Readers will be Claire Brasseaux and Karli Cormier. Rebecca, known to many as "Becky", was born August 1, 1960. She was a loving wife, mother, grandmother, sister, and friend. She was a parishioner at St. Bernard Catholic Church and was devoted to her Catholic faith. Becky was the caregiver and prayer warrior of the family. Her family was everything to her and she cherished her time spent with them. In her spare time, she enjoyed reading and cross stitching. She will be dearly missed. She is survived by her husband of 43 years, Wilfred "Willie" Cormier, Jr.; daughter, Kristie Brasseaux (Chad); sons, Buddy Cormier (Afton) and Danny Cormier (Christina); grandchildren, Claire Brasseaux, Ethan Brasseaux, Karli Cormier, Halli Cormier, and Buddy Cormier, Jr.; brothers, David Castille (Tammy) and Kim Castille (Diana); and sister, Jenny Cormier (Carl). She was preceded in death by her parents, Herbert and Betty Lagrange Castille; and siblings, Tony Castille, Andy Castille, and Suzie Fontenot. Pallbearers will be Ethan Brasseaux, Charley Cormier, Seth Cormier, Blake Cormier, Cody Fontenot, and Brandon Castille. Honorary pallbearer will be Buddy Cormier Jr. Pellerin Funeral Home of Breaux Bridge, 211 Berard St., Breaux Bridge, LA 70517, (337-332-2111) is in charge of arrangements.
To order memorial trees or send flowers to the family in memory of Becky C. Cormier, please visit our flower store.