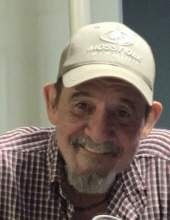 Arnaudville - A Mass of Christian Burial will be celebrated at 11:30 am on Monday, April 19, 2021 at St. John Francis Regis Catholic Church in Arnaudville for Carl Keith Dugas, 61, who passed away on Tuesday, April 13, 2021, at The Carpenter House of St. Joseph Hospice. The family requests that visiting hours be observed at the funeral home from until 3:00 pm - 9:00 pm on Sunday and continue on Monday from 8:00 am until 11:00 am. A rosary will be prayed at 7:00 pm on Sunday evening. Rev. Travis Abadie will officiate at the Funeral Mass. Interment will follow at St. John Francis Regis Cemetery in Arnaudville. Carl "Keith" Dugas of Opelousas, passed away peacefully on April 13th. Keith was a devoted Dad, Pop, brother, and spouse, who was loved by everyone who knew him. He was a hardworking man, always offering to help others in any way he could. Keith enjoyed hunting, fishing, and wood working. He will be remembered as a man who was always cracking jokes and wearing a smile. You could not help but to feel uplifted and content in his presence. Keith could make friends with anyone he met. He especially adored his grandkids, or as he would call them, his little “buh-boos”. There was immense joy in Keith's life, and his legacy will live on in the memory of his loved ones. He is survived by his daughter, Deidre Dugas Richard and son-in-law, Logan Richard; spouse, Loretta Richard and her son, Hank Brown; brother, Scotty Blaine Dugas (Paula); sister, Sandra Dugas Lejeune (Tunnie); and grandchildren, Dagan Richard, Adilynn Richard, and Evelyn Richard. He was preceded in death by his parents, Joseph Louis Dugas and Mary Geraldine Richard Dugas. Pallbearers will be Scotty Blaine Dugas, Dagan Richard, Tunnie LeJeune, Logan Richard, Chandler Dugas, and Tyler Smith. Honorary pallbearers will be Shane LeJeune and Brandon LeJeune. Pellerin Funeral Home of Arnaudville, 314 St. Landry St., Arnaudville, LA 70512, (337-332-2111) is in charge of arrangements.
To order memorial trees or send flowers to the family in memory of Carl "Keith" Dugas, please visit our flower store.