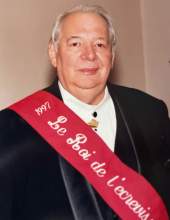 Breaux Bridge- A service of Christian burial will be celebrated on Friday, May 14, 2021 at 10:00 a.m. at St. Francis of Assisi Catholic Church in Breaux Bridge for Carl Michel Simon. Deacon Ken Soignier of St. Joseph Catholic Church in Cecilia will officiate the ceremony. Interment at St. Bernard Cemetery number two will follow at a later date.The family requests that visitation be observed at Pellerin Funeral Home in Breaux Bridge on Thursday, May 13, 2021 from 5:00 p.m. to 9:00 p.m. A rosary will be prayed at 7:00 p.m. Visitation will resume on Friday, May 14th from 8:00 a.m. until the time of the service at 10:00 a.m.Cherishing Carl’s memories are his four daughters Carleen Marie Simon, Karen Simon Durio and Simone Simon all of Breaux Bridge, Renee Michel Simon Babineaux and her husband Kip of New Iberia; seven granddaughters Lauren Durio Taliaferro and her wife Raley, Caroline DeJean, Natalie DeJean, Alexandra Ainsley Yates, Maggie Alberry and her husband Alan, Shelby Babineaux and Sydney Babineaux; three great-grandchildren Emma Alberry, Crew Alberry and Whitman Taliaferro.Carl was preceded in death by his father Michel Simon, mother Lillian Bonin Simon, brother Chester Lee Simon, daughter Elizabeth Simon DeJean and lastly his beloved wife of 65 years Renella Guidry Simon.Born on December 17, 1931, Carl passed away peacefully on May 9, 2021. For 89 years, Carl was a lifelong resident and champion of Breaux Bridge. He attended St. Bernard School and graduated from Breaux Bridge High School in 1948. Carl earned a Bachelor of Science in Pharmacy Degree from Loyola University in 1952 and was bestowed a Doctorate Degree in Pharmacy from Loyola University in 1982. He served in the Air Force and was honorably discharged as Captain in 1957.Carl was the founder and owner of Simon’s Pharmacy, which was one of the oldest family-owned businesses in Breaux Bridge having continuously operated for the past 60 years. He served as pharmacist of St. Martin Hospital, formerly Gary Memorial Hospital, for over 30 years.In his active years, Carl was a member of the National Retail Druggist Association, the Louisiana State Pharmaceutical Association and a founding stockholder of the Louisiana Wholesale Drug Company. He was presented the Gold Certificate by the Louisiana Board of Pharmacy honoring his 50 years of service in the pharmaceutical business. He served as a Commander of the Breaux Bridge American Legion, President of the Breaux Bridge Volunteer Fire Department, a member of the Breaux Bridge High School Athletic Association and the Breaux Bridge Holy Name Society.Along with his wife Renella Simon, Carl was inducted into the Breaux Bridge Crawfish Festival Association Hall of Fame in 2007. He was an active member of the BBCF board for 10 years and served as president in 1964. Also, Carl was the Founder and President of the Breaux Bridge Crawfish Festival Merchants Association. He was instrumental in establishing the World Famous Crawfish Festival as the second largest tourist attraction in the State of Louisiana, only after the New Orleans Mardi Gras. Carl was officially crowned Crawfish King in 1997, but those closest to him always referred to him as “The King”.Carl’s love for his family, friends and Breaux Bridge ran deep. His generous heart and spirit could be felt all throughout the community. He helped and cared for sick people in need in more ways than one. By supporting local and statewide elections, he shaped the careers of many politicians. The Godfather’s door was always open to those who sought his words of wisdom. His business acumen, quick wit and sense of humor were legendary. Carl had a zest for life. He lived for good food and music and loved a good party, especially one “in the streets”. He often said, “When it stops being fun, it’s time to shut it down.”Serving as pallbearers will be Kip Babineaux, Terry Boyd, Jack Delhomme, Jerry Delhomme, Gathian Fertitta, Dr. Kirby Guidry, Jimmy Hamilton and Senator Freddie Mills. Honorary Pallbearers include Mr. C’s all-star caregiving team Norma Broussard, Emma Champagne, Elba Davis, Sophie Guidroz and Ametra Strong, as well as longtime friends Bobby Ayo, Larry Hanson, Johnny Martin and Dale Menard.Gift bearers will be Caroline DeJean and Lauren Durio Taliaferro. Scripture readers will be Maggie Alberry and Natalie DeJean.The Simon family extends a heartfelt appreciation to his loving caregivers and compassionate friends for their undying love and support. The family would like to acknowledge the caring staff at St. Martin Hospital and Dr. Warren Degatur and staff.In memory of Carl Michel Simon, the family requests donations may be made to any of the following: New Orleans Pharmacy Museum, 514 Chartes Street, New Orleans, Louisiana 70130 or www.pharmacymuseum.org Breaux Bridge Volunteer Fire Department, 225 North Main Street, Breaux Bridge, Louisiana 70517 Teche Center for the Arts, 210 East Bridge Street, Breaux Bridge, Louisiana 70517 or www.artsatteche.comPellerin Funeral Home of Breaux Bridge is in charge of arrangements. Online obituary and guestbook may be viewed online at www.pellerinfuneralhome.com(link is external). <iframe class="ts_player" allowfullscreen="true" allowtransparency="true" allow="autoplay; fullscreen" frameborder="0" height="330" scrolling="no" src="https://www.tributeslides.com/videos/embedded_video/72YZ7G54D7RGL4Y2" width="512"></iframe>
To order memorial trees or send flowers to the family in memory of Carl Michel Simon, please visit our flower store.