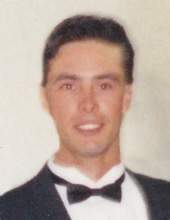 Breaux Bridge - A Mass of Christian Burial will be celebrated at 11:00 am on Saturday, February 20, 2021, at Pellerin Funeral Home in Breaux Bridge for Chad James Dauphinet, 48, who passed away on Sunday, February 14, 2021. The family requests that visiting hours be observed at the funeral home from 8:30 am until time of services on Saturday. A rosary will be prayed at 9:30 am on Saturday. Rev. Randy Courville will officiate at the Funeral Mass. Readers will be Lori and Gerard Bienvenu. Interment will follow at St. Michael the Archangel Cemetery in Henderson. Chad was an avid outdoorsman who enjoyed hunting and doing mechanic work. He enjoyed cooking and having a good cold beer. Chad will be sadly missed by all who knew and loved him. He is survived by his parents, Judson and Sandra Ann Robin Dauphinet of Breaux Bridge; brother, Jacob Dauphinet of Lafayette; and his fiancée, Wendy Sonnier of Henderson. He was preceded in death by his paternal grandparents, Adam and Jane Dauphinet; maternal grandparents, Early and Mary Ann Robin; and his aunt, Angie Robin. Pellerin Funeral Home of Breaux Bridge, 211 Berard St., Breaux Bridge, LA 70517, (337-332-2111) is in charge of arrangements.
To order memorial trees or send flowers to the family in memory of Chad James Dauphinet, please visit our flower store.