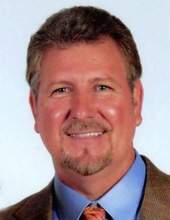 New Iberia - A Funeral Service will be held at 11:00 am on Thursday, August 26, 2021, at Pellerin Funeral Home in New Iberia for Charles Keith Viscardi, 62, who passed away on Sunday, August 22, 2021, in New Iberia.Rev. Ed Degeyter will officiate.Graveside services will be at 3:30 pm on Thursday at the Beaver Creek Cemetery, near Oakdale.A gathering of family and friends will be Wednesday from 4:00 pm until 9:00 pm at Pellerin Funeral Home. Visitation will continue on Thursday from 8:00 am until 11:00 am.A rosary, led by Deacon Durk Viator, will be prayed at 6:30 pm on Wednesday. Keith Viscardi was born on July 27, 1959 in Ville Platte, LA to RC & Gaynel Viscaris. He had a love for muscle cars and eventually owned a family drag racing team. In his early days Keith was a top notch welder, a skill he mastered and was often referred to as "Hollywood". Keith was an avid golf professional and traveled the country with his family as a golf instructor. As time passed he and his family returned home to Louisiana where Keith opened the family business in industrial staffing. After many successful years he retired after his battle with cancer that led to the loss of his right leg. This did not slow him down, Keith was a world traveler, having lived in Vietnam & Malaysia for his final years. One of his greatest accomplishments was his trip to the Great Wall of China. In May of 2021 Keith returned home to create many wonderful memories that his family will cherish, such as several fishing trips, one of his favorite hobbies. Keith was a kind man, he loved his family and he was such a proud Paw Paw. He will be greatly missed by those who love himHe is survived by his two sons, Christopher Viscardi, and Alex Viscardi (Alexis); mother, Edna Gaynel Viscardis; four sisters, Theresa Viscardis, Denise Price, Susan Viscardis, and Celeste Langford; brother, Mitchell Domenique Viscardis; five grandchildren, Aleksa M. Viscardi, Angelo D. Viscardi, Alex Viscardi, II, Aubriana Viscardi, and Alafair Viscardi.He was preceded in death by his father, Robert "RC" C Viscardis and a brother, Robert Paul Viscardis. Pellerin Funeral Home, 502 Jefferson Terrace Blvd., New Iberia, LA 70560, (337-365-3331) is in charge of arrangements.<iframe class="ts_player" allowfullscreen="true" allowtransparency="true" allow="autoplay; fullscreen" frameborder="0" height="330" scrolling="no" src="https://www.tributeslides.com/videos/embedded_video/3WMDW885J5CSKN37" width="512"></iframe>
To order memorial trees or send flowers to the family in memory of Charles Keith Viscardi, please visit our flower store.