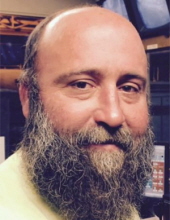 New Iberia - A Funeral Service will be held at 12:00 pm on Saturday, January 23, 2021, at Pellerin Funeral Home in New Iberia for Chris Brennan Derise, 50, who passed away on Tuesday, January 19, 2021, in Lafayette. Interment will follow in Beau Pre Cemetery. Rev. Ed Degeyter will officiate. A gathering of family and friends will be Saturday from 10:00 am until 12:00 pm at Pellerin Funeral Home. A resident of Lydia, Chris was born on October 12, 1970 to Lloyd Derise and Mae Broussard Derise, and worked at the M.A. Patout Sugar Mill as a mill floor technician. He enjoyed fishing, camping, riding his four wheeler, and on his days off he would like to get away and enjoy life. Survivors include his daughter, Kristen Derise (Nicolas Engle) of Youngsville; mother, Mae Derise of Lydia; brother, Tod Derise of Lydia; sister, Cyd Buteau (Karl) of Jeanerette; two grandchildren, Brennan Engle, and Harlee Engle; two nephews, Ryan Buteau of Loreauville, and Michael Buteau of Lafayette; and a great niece, Emmeline Buteau. He was preceded in death by his father, Lloyd Derise. Pallbearers will be Tod Derise, Karl Buteau, Ryan Buteau, Michael Buteau, Nicolas Engle, and Donovan Varnado. Pellerin Funeral Home, 502 Jefferson Terrace Blvd., New Iberia, LA 70560, (337-365-3331) is in charge of arrangements.
To order memorial trees or send flowers to the family in memory of Chris Derise, please visit our flower store.