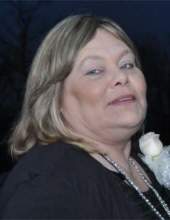 Breaux Bridge - A Funeral Service will be held at 3:00 pm on Saturday, April 24, 2021, at Pellerin Funeral Home of Breaux Bridge for Christine Marie Morgan, 64, who passed away on Thursday, April 15, 2021, at Lafayette General Medical Center. The family requests that visiting hours be observed at the funeral home from 9:00 am until 2:45 pm on Saturday. A rosary will be prayed at 2:00 pm on Saturday. Deacon Marcel "Butch" Hebert will officiate at the Funeral Service. Interment will follow at later date. Christine was born October 22, 1956 in New Iberia. She attended Loreauville High where she was a cheerleader. She also attended Folse School of Dance in New Iberia for many years. Christine was easy going, always had a smile on during good and bad times. No matter what life threw at her, she seemed to shine through it all. She was a people person and enjoyed visiting with her loved ones; she was a great listener and gave excellent advice. Her hobbies included camping, fishing and dancing. However, her greatest achievement was her family. She cherished her time spent with them. Her husband James of many years describes Christine as the best person he has ever met and he loves her so much. Her two sons, Ryan and Keenan, think that their mom was the coolest person on the planet, trustworthy, honest, and showed "a love without end, Amen!" And lastly her only grandson, Jansen, will miss his "Gammy" dearly, but he knows that she is reunited with many family members, including her dog, Suki and granddog, Gus. She will be deeply missed by all who knew and loved her. She is survived by her husband, James "David" Morgan; two sons, Ryan Paul Judice (Christy) and Keenan James Morgan; grandchild, Jansen Thomas Cooper Judice; brother, Troy Thomas Eldridge (Edie) and his children, Toree, Troy Jr (TJ) , Skyler, John-Garrett and Raven.; step son, David Keith Morgan (Michelle); two step grandchildren, Kaycee Lyn Morgan (Justin Sidener) and David Louis Morgan (Kira); two step great grandchildren, Hunner Morgan and Kinley Claire Morgan; sister in-law, Margaret Edna Faye Marcel (Tom) and her daughter, Stasia Marcel Bozeman. She was preceded in death by her parents, Thomas John and Barbara Mae Eldridge; and one step great grandchild, Reese David Morgan. Pellerin Funeral Home of Breaux Bridge, 211 Berard St., Breaux Bridge, LA 70517, (337-332-2111) is in charge of arrangements.
To order memorial trees or send flowers to the family in memory of Christine Marie Morgan, please visit our flower store.