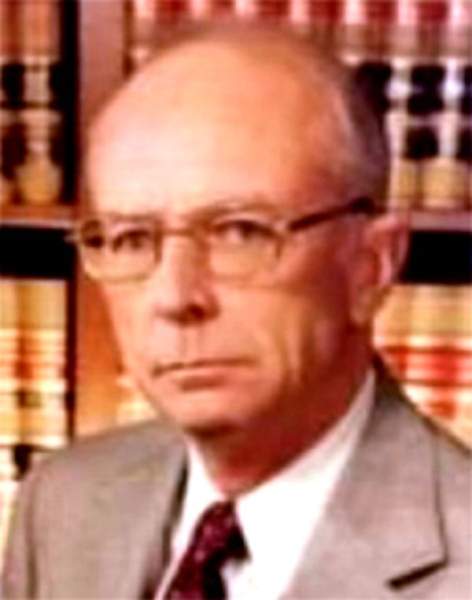 Msgr. Richard Greene will be the Celebrant.

A rosary, led by Deacon Patrick Burke, will be prayed at 6:30 pm Monday.

Dracos Dimitry Burke was born on September 20, 1919 to the late Celeste Dimitry Burke and Donald Robert Burke. He attended St. Peter’s College (now Catholic High School, New Iberia), missing the formal graduation with his class because he was serving as a page in the House of Representatives for then Congressman Numa F. Fontenot.

Upon graduation from SLI (now the University of Louisiana), he married his beloved Carolyn (Carrie) Dupuy. He was accepted into the Army Air Corps where he eventually became one of the first bombardier instructors. He was hand-picked to be trained to use the secret Norden Bombsight, at one time the best kept secret next to the atomic bomb. He was commissioned as a 2nd Lt in the US Army Air Corps.

After WWII, he went to the University of Denver Law School and quickly became part of the Judge Advocate General’s office. This service took him and his growing family all over the world, living in Louisiana, New Mexico, Colorado, Arizona, Germany, Florida, Spain, South Carolina, and finally Offutt AFB, Nebraska, the headquarters of the Strategic Air Command, where he was named the chief legal officer for all the SAC Air Force Bases. He had an outstanding career for which he received the Distinguished Service Medal, the first Air Force Commendation Medal to be awarded in Spain for his service with the 16th Air Force there and the Air Medal as an instructor at Kirtland Field, New Mexico.

In 1970, Col Burke retired and moved back home to New Iberia. In 1972, he became an assistant district attorney for the 16th JDC, becoming their major prosecutor. He prosecuted many spectacular felony cases including several that he had to defend in the US Supreme Court.

Since his second retirement, he enjoyed traveling, taking care of his yard, and spending time with his family. He followed the Ragin’ Cajun Baseball team, a season ticket holder for years. His sense of humor and wisdom will be sorely missed.

In addition to his parents, he was preceded in death by a son, Alan Dracos Burke; his wife of 69 years, Carrie Dupuy Burke; grandson William Joseph Burke; brother Donald Burke, sisters Elizabeth Larroque and Patricia Dauterive.