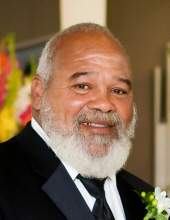 In Loving Memory of Cramin P. Wiltz, I “TILL WE MEET AGAIN” St. Martinville - A Mass of Christian Burial will be held at 10:00 am on Friday, February 19, 2021, at Notre Dame Catholic Church in St. Martinville for Cramin P. Wiltz, I, 70, who passed away on Wednesday, February 10, 2021. The family requests that visiting hours be observed at the funeral home in St. Martinville from 8:30 am until 9:45 am on Friday. A rosary will be prayed at 9:00 am on Friday. Interment will follow at St. Michael Cemetery in St. Martinville. Cramin Peter Wiltz I was born on November 9, 1950, to the union of Lionel and Ivy Wiltz in St. Martinville, Louisiana. He was one of 8 children. He was baptized at Notre Dame Catholic Church in St. Martinville, Louisiana, and graduated from Adam Carlson High School where he excelled in sports, especially football. He was selected to play football in an All-Star Game at Southern University in Baton Rouge, LA. He was joined in wedded bliss to Mary L. Brown by Fr. Thomas Mullally, SVD. After a period of time, they moved and lived in Tacoma, Washington, where their first child was born. In Washington, Cramin worked on the Tacoma Smelter Plume Project for the Asarco Company melting copper. Cramin was a homebody and wanted to come back to his hometown; however, moved to Houston, Texas for better job opportunities. In Houston, he worked for Keller, Brown, and Roote (KBR). Eventually, his dreams were fulfilled and Cramin had the opportunity to come back home and did so where he started working for Texaco now ChevronTexaco. Cramin served on the St. Martin Parish Library Board and would not miss a meeting if at all possible. He loved working in the community helping others. Before his health started to fail, he enjoyed cooking with his buddies Lloyd James, Larry LeBlanc, Harold Houston, Errol Solomon, and Gerard Williams on the Notre Dame Catholic Church Retreat Team. He loved mentoring and working with the development of the youth in the community. Cramin loved the outdoors and was an avid hunter and fisherman. He was also a true cowboy enthusiast. He could name all the classics like "Wagon Train," "Bonanza," "Rifleman," and liked watching John Wayne and Audie Murphy. He also loved working on classic cars. But he truly loved visiting his best buddy and friend "Toe Boy," calling to go and assist him when he repaired an automobile. He was employed by Chevron Texaco for over 30 years and retired as a Corrosion Engineer Technician Specialist. Friends gave him the nicknames of "CP" and "Soul." He was very good at his job and enjoyed working. After retiring, he kept in touch with the guys at work and continued to talk about the job. Often he was called upon to consult with any situation that may arise in the oil/gas industry. The highlight of the year for him was Christmas. He was the local Santa Clause for the Kiwanis Club, Saint Martinville Primary School, and Trinity Catholic School. His role transcended race, many times his Santa suit was not needed as kids would come and jump to sit on his lap and tell him what they wanted for Christmas. The personification of the character was no match for the character he held within--he loved working and encouraging kids to always be good and listen to their parents. It was truly amazing; no matter where he went the kids would callout, "Look it’s Santa Clause!" They would rush to him and say, "Santa I have been good! Are you going to come to my house?" His response would be, "Sure...if you have been a good little boy/girl!" Cramin's love and memories will be treasured in the hearts and minds of all. Lastly, Cramin loved his family. He is survived by his wife Mary L. B. Wiltz of 52 years; sons, Darroll L. Wiltz (Georgette) of Goodyear, AZ, Kevin O. Wiltz (Janice) of Augusta, GA, Quentin P. Wiltz (Monique) of Pearland, TX, and Cramin P. Wiltz II (Precious) of Madison, AL; grandchildren, Keneisha, Derek, Daniel, Stephanie, Jedidiah, Nicolas, Nekeshia, Michael, Phillip, Ethan, Evan, Aislynne, Whitney, Cramin III, Winston, Hendrix, and Harrison; brothers, Craig Wiltz, Anthony Wiltz, Rod Wiltz (Josephine), nephews, nieces, cousins, and friends. He was preceded in death by his parents Lionel and Ivy Wiltz; sisters, Mary Shirley Plessy, Jenerita Catalon, and Cinder Wiltz; brother, Michael Wiltz; and aunts, uncles, cousins, nephews, and many friends. Pallbearers will be Darroll Wiltz, Quentin Wiltz, Kevin Wiltz, Cramin Wiltz, II, Mac Jude Wiltz, Marcus Wiltz, Damien Hypolite and Sakeivus Robertson. Honorary pallbearers will be Lloyd James, A.J. Robertson, Terry Hill, Edward Davis, Athan Olivier, Rod Wiltz, Randall Wiltz and Ralph Catalon. Cramin loved kids and their wellbeing. Even in death, he would have liked to help children and those less fortunate. In lieu of flowers, there are two organizations and missions that the family asks for contributions to be made in Cramin’s name: - St. Jude’s Children's Research Hospital through the "Cramin P. Wiltz I Memorial Fund." You can use this link online which can be copied and pasted for online donations: https://fundraising.stjude.org/site/TR/GiftFunds/GiftFunds?px=6926675&pg=personal&fr_id=39300&fbclid=IwAR3_tFWCCMC2qMBxGd87acE6iJbMWK8GQFPBQCJGiDwNK1p9UTo23qTcQB8 - The Community of Jesus Crucified St. Teresa Soup Kitchen accepts both food and/or monetary donations. Please make donations on behalf of Cramin P. Wiltz I, to help the local community. St. Teresa Center for the Works of Mercy, 103 Railroad Avenue, Saint Martinville, LA. 70582 (337) 394-6550 Pellerin Funeral Home of St. Martinville, 112 New Market St., St. Martinville, LA 70582, (337-332-2111) is in charge of arrangements.
To order memorial trees or send flowers to the family in memory of Cramin P. Wiltz, I, please visit our flower store.