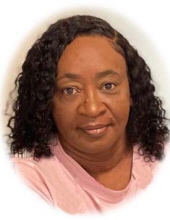 Breaux Bridge - A Funeral Service will be held at 12:00 pm on Saturday, September 18, 2021, at Pellerin Funeral Home of Breaux Bridge for Debra Williams, 62, who passed away on Saturday, September 4, 2021.The family requests that visiting hours be observed at the funeral home from 8:00 am until 12:00 pm on Saturday.Murphy Williams will be speaking at the Funeral Service. Interment will follow at a later date. Debra, known to many as, "Deb," was born April 8, 1959. She enjoyed reading her Bible and sharing God's truth with her children and grandkids. She enjoyed cooking, cleaning, and planting her flowers and watching them bloom. Debra gave so much love to everyone that came in her life. She had the biggest heart and gave 100% of herself to everything she did: as a mother, as a grandmother, as a sister, and as a friend. She will be deeply missed and forever loved. She is survived by her five daughters, Maria Williams, Kimmely Williams, Adrex Williams, Ceillie Williams and Janequia Williams; son, Cody Williams; brothers, Jerry Williams, Joseph Williams (Angela), Jessie Williams, Paul Williams and Gralin Williams; daughter-in-law, Melanie Williams; grandchildren, Trinity Williams, Trairious Sylvester, Jyi Williams, Jakoryhn Wiltz, Elton Sylvester, Tyi Williams, Paris Wiltz, Chaz Williams, Brennan Williams, Bria Williams, Niyla Willams, Kendarious Mouton, Jr., Riley Sylvester, Sky Sylvester, Chase Sylvester, Kruiz Mouton and Keron Thomas; and her great grandchildren, Malani Thomas and Noah Walton.She was preceded in death by her parents, Murphy Henry and Shirley Williams; sister, Mardes Noel; two brothers, Murphy Williams and Wilfred Williams; son, Felton Williams; and grandchild, Destiny Sylvester. Pellerin Funeral Home of Breaux Bridge, 211 Berard St., Breaux Bridge, LA 70517, (337-332-2111) is in charge of arrangements.

To order memorial trees or send flowers to the family in memory of Debra Williams, please visit our flower store.