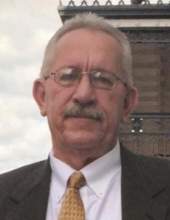 Breaux Bridge - A Mass of Christian Burial will be celebrated at 2:30 pm on Tuesday, April 6, 2021, at St. Bernard Catholic Church in Breaux Bridge for Eddie "Coach Rob" James Roberts, 71, who passed away on Wednesday, March 31, 2021, at his residence. The family requests that visiting hours be observed at the funeral home from 3:00 pm until 9:00 pm on Monday and continue on Tuesday at 9:00 am until 2:00 pm. A rosary will be prayed at 7:00 pm on Monday by Deacon Marcel "Butch" Hebert. Father Blake Dubroc will officiate at the Funeral Mass. Altar Server will be Sawyer Thomas Roberts. Readers will be Amanda Wagnon Guidry and Beth Z. LeBlanc. Honorary Gift Bearers will be Marshall James Roberts, Mary-Catherine Roberts, Anna Claire Roberts, and Ava Grace Roberts. A Private Interment will be held at a later date. Eddie was born and raised in Breaux Bridge, Louisiana and graduated in 1968 where he was a member of the High School basketball team and a high jumper for the track team. He was also a member of the Army National Guard. Eddie shared his love of sports with his children, coaching their little league teams and supporting them through high school and beyond. When his 20-year career in the oilfield abruptly ended in the 80's, he took the opportunity to return to college and pursued a degree in education, where he graduated with honors. This allowed him to teach and coach as he did with his children. He retired after 30 years teaching Chemistry and Physics at both Beau Chene and St. Thomas More High School. He enjoyed being in the classroom challenging his students. During his time at St Thomas More he coached both girls track and football. Upon retirement he was an assistant football coach and a part of three championship seasons. His final years were spent watching and guiding his grandchildren in faith, learning, and sports. He loved horse racing, boating, working crossword puzzles, cooking and baking. His greatest enjoyment in life was going on vacation and adventure trips with his family. His greatest accomplishment in life were his children. He is survived by his wife of 50 years, Yvonne Dupuis Roberts; sons, Trevor James Roberts and Scott Thomas Roberts (Ashley); daughter, Natalie Faye Roberts; sister, Carmen R. Gray; grandchildren, Trent James LeBlanc, Brennan Paul Roberts, Sawyer Thomas Roberts, Marshall James Roberts, Mary-Catherine Roberts, Anna Claire Roberts and Ava Grace Roberts; great-grandchild, Eleanor Grace LeBlanc; brothers-in-law, Blaise Dupuis (Pattie), Mark Dupuis (Alison) and Raymond Broussard (Christine); and sisters-in-law, Elaine Zuschlag (Richard), and Peggy Chance (Dr. Al). He was preceded in death by his parents, Thomas and Mary Ruth Mathieu Roberts; brother, Russel Roberts, Sr.; sisters, Jennifer R. Harry and Rebecca Roberts; parents-in-law, Adley and Ann Dupuis; and brother-in-law, Wayne Gray. Pallbearers will be STM Coaches: Jim Hightower, Terry Tidwell, David LeBlanc, Corey Arceneaux, Lance Strother, and Marty Cannon. Honorary pallbearers will be Roy Marvin, Dale Menard, and Dr.Ray Lacour Pellerin Funeral Home of Breaux Bridge, 211 Berard St., Breaux Bridge, LA 70517, (337-332-2111) is in charge of arrangements.
To order memorial trees or send flowers to the family in memory of Eddie "Coach Rob" James Roberts, please visit our flower store.