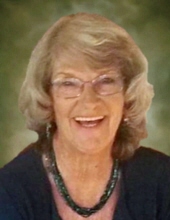 Breaux Bridge - A Funeral Service will be held at 2:00 pm on Sunday, January 24, 2021, at St. Bernard Catholic Church in Breaux Bridge for Emilie Ethel Hebert Dever, 78, who passed away on Wednesday, January 20, 2021. The family requests that visiting hours be observed at the funeral home from 3:30 pm until 9:00 pm on Saturday and continue on Sunday from 8:00 am until 1:30 pm. A rosary will be prayed by Geoff Gallet at 7:00 pm on Saturday. Deacon Marcel “Butch” Hebert will officiate at the Funeral Service. Interment will follow at St. Bernard Cemetery No. 2 in Breaux Bridge at a later date. Emilie was a life-long resident of Breaux Bridge. At the age of six, she joined the Breaux Bridge High School Marching Band as a Majorette and performed with them until her high school graduation. She also played the saxophone as a member of the band. During those same years, she attended the Merry Joy Gerami School of Dance, earning a teaching certification. Emilie earned her Bachelor's Degree in Business from S.L.I. and then later received her Bachelor's Degree in Education from U.S.L. After graduating, she was an educator with the St. Martin Parish School Board for 22 years. During that time, she touched the lives of hundreds of students as well as faculty. Emilie and her husband, John, started their business, John's Store, in 1986 and through the years have been charitable members of the community. She was a classy lady with a quirky sense of humor. Emilie was the life of the party and seemed to never have met a stranger. In her spare time, she enjoyed sewing, arts and crafts, being outdoors, dancing, playing video poker, and most of all spending time with her family and friends, and being a proud and loving grandmother. She will be missed dearly by all who loved her. She is survived by her husband of 54 years, John Dever; two daughters, Kimberley D. Thibodeaux (Sean), and Lara D. Trahan (Weston); son, Bart Dever (Chantelle); grandchildren, Nicholas Dever, Kasey Hayes (Aaron), Korey Thibodeaux (Wade Landerno), Jake Dever (Jade), Tori Dever, Taylor Dever, Tonya Trahan, Destiny Trahan, Branson Theriot (Ezola) and Dillian Theriot; great grandchildren, Kyle Miller, Brent Miller, Ashlie Miller, Shai Miller, Judd Dever and John Dever; great-great grandchild, Ryker Miller; brother, Chester Hebert Jr. (Marlene); sister, Dorothy Dubuisson; godchild, Richard Hebert, Jr.; and numerous nieces, nephews, brothers- and sisters-in-law and friends. She was preceded in death by her parents, Chester Hebert, Sr. and Edwina Crowder Hebert; grandson, Justin Trahan; and brother, Richard Hebert, Sr. Pallbearers will be Nicholas Dever, Jake Dever, Branson Theriot, Dillian Theriot, Aaron Hayes and Richard Hebert Jr. Pellerin Funeral Home of Breaux Bridge, 211 Berard St., Breaux Bridge, LA 70517, (337-332-2111) is in charge of arrangements.
To order memorial trees or send flowers to the family in memory of Emilie Ethel Hebert Dever, please visit our flower store.