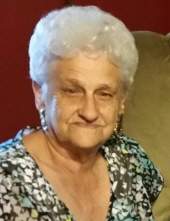 Henderson - A Funeral Mass will be celebrated at 11:00 am on Thursday, September 2, 2021, at Our Lady of Mercy Catholic Church in Henderson for Evelyn S. Allemond, 83.The family requests that visiting hours be observed at the funeral home in Breaux Bridge from 2:00 pm until 8:00 pm on Wednesday and continue on Thursday at 8:00 am until 10:30 am. A rosary will be prayed at 6:30 pm on Wednesday.Rev. Lloyd F. Benoit will officiate at the Funeral Mass. The Lord blessed the world when he gave us Evelyn on the 4th of December in 1937 and broke our hearts when he took her to paradise on the 28th of August in 2021. She rose peacefully into his arms, surrounded by loved ones in prayer. She was a woman of duty, conviction, and resiliency, standing as the unquestioned leader of our family. She was a lioness when her cubs were in need and mama bear when our hearts were broken. She fiercely worked in service to the Lord, devoting countless hours to teaching his word in youth catechism and acting as a member of the Ladies Alter Society. She was a selfless giver and, in true Evelyn fashion, chose to forgo retirement to take care of the “elderly.” Her sense of loyalty and her work ethic were surpassed only by her passion for life and family. There was always a cup of coffee waiting, whose warmth was only exceeded by that of her smile. Everybody was welcomed, and no one left hungry. Ever. Especially during her Christmas eve celebrations, which were legendary. She was the glue that bound us together, and her memory will continue to galvanize us for years to come. She is survived by her husband, Leonce “Nunu” Allemond; daughters, Gwen Nargassans, Lisa Guidry (Terrell), and Lori Laviolette (Alvon); son, Perry James Allemond Sr. (Marjorie); grandchildren, Perry James Allemond Jr., Amanda Duplechien (Jody), Andrea Briscoe (Justin), Kimberly Thibodeaux (Shane), Jeremy Patin (Kristine), Joshua Patin (Michelle), Alexi Laviolette, Tanesha Hebert, Hayli Allemond, Cameron Demonter (Marquis); great-grandchildren, Braylon, Holden, Harlie, Johl, Cassidy, Gavin, Flynn, Peyton, Colston, Heath, Reese, Elias, Kayden, Ava, Terry, Destiny, Brea, Ella, Xander, and Vallie; and brothers, Lester Serrette (Velma), Charles Serrette (Anna). She was preceded in death by her parents, Alcide and Editha Patin Serrette; sons, Kurt Allemond and Terry Paul “Bottle” Allemond; and one grandson, Jamey Allemond. Pallbearers will be Perry James Allemond Jr., Jeremy Patin, Joshua Patin, Philip Serrette, Gavin Theriot, and Johl Duplechien.Honorary pallbearers will be Lester Serrette, Charles Serrette.Pellerin Funeral Home of Breaux Bridge, 211 Berard St., Breaux Bridge, LA 70517, (337-332-2111) is in charge of arrangements.<iframe class="ts_player" allowfullscreen="true" allowtransparency="true" allow="autoplay; fullscreen" frameborder="0" height="330" scrolling="no" src="https://www.tributeslides.com/videos/embedded_video/9HLG789X7Q9BDC4S" width="512"></iframe>
To order memorial trees or send flowers to the family in memory of Evelyn S. Allemond, please visit our flower store.