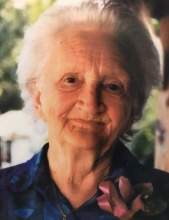 Breaux Bridge - A Mass of Christian Burial will be celebrated at 10:00 am on Wednesday, May 5, 2021, at St. Bernard Catholic Church in Breaux Bridge for Felecian Allemand, 104, who passed away on Saturday, May 1, 2021, at Lady of the Sea in Cut Off, LA. The family requests that visiting hours be observed at the funeral home from 10:00 am until 9:00 pm on Tuesday, and continue on Wednesday at 7:00 am until 9:30 am. A rosary will be prayed at 7:00 pm on Tuesday by Deacon Butch Hebert. Rev. Garrett McIntyre will officiate at the Funeral Mass. Interment will follow at St. Michael Cemetery in St. Martinville. Felecian was devout Catholic who displayed an unending faith in God, prayed the rosary daily and attended mass when she could on a weekly basis. She enjoyed fishing, cooking, gardening, and watching TV. Felecian will be remembered for her love for God, family, and her generosity toward others. She is survived by her two daughters, Barbara Guidry (Earl) of Butte La Rose, Helen "Toot" Dore' (D.D. "Boy") of Golden Meadow; son, Ames "T-boy" Allemand (Earline) of Cut Off, LA; ten grandchildren, Crystal Boudreaux, Misty Thibodeaux, Kasey Guidry, Perry Dore', Terry Dore', Keith Dore', Lisa Percle, Annette Terrebonne, and Linda Gail Doucet and 20 great-grandchildren. She was preceded in death by her husband, Michel Allemand; son, Gudfey Allemand; parents, Aurelian and Julia Barras Latiolais; brothers, Vincent Latiolais and Almicar Latiolais; sisters, Maggie Hebert, Estelle Talley, Amanda Thibodeaux and Celina Melancon; two grandchildren, Riley Allemand and Eddie Allemand; two great-grandchildren, Isley Thibodeaux and Jonathan Dore'. Pallbearers will be Kasey Guidry, Perry Dore', Terry Dore', Keith Dore', Randy Doucet Jr., and Reid Boudreaux. Pellerin Funeral Home of Breaux Bridge, 211 Berard St., Breaux Bridge, LA 70517, (337-332-2111) is in charge of arrangements.
To order memorial trees or send flowers to the family in memory of Felecian Allemand, please visit our flower store.