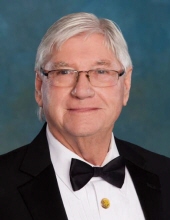 Breaux Bridge - A Mass of Christian Burial will be celebrated at 11:00 am on Saturday, February 6, 2021, at St. Bernard Catholic Church in Breaux Bridge for Gregory James Guidroz Sr., 72, who passed away on Wednesday, February 3, 2021, at his residence. The family requests that visiting hours be observed at the funeral home from 1:00 pm until 9:00 pm on Friday February 5, 2021 and continue on Saturday from 7:00 am until 10:30 am. A rosary will be prayed at 7:00 pm on Friday. Rev. Garrett McIntyre will officiate at the Funeral Mass. Readers will be Faye Hebert Sage and Kylie R. Scott. Gift Bearers will be McKenzie Scott, Kylie Scott, and Avery Grace Patin. Interment will follow at St. Bernard Cemetery No. 2 in Breaux Bridge. Gregory was an excellent saxophone musician and was a member of the Musician's Union. He began playing with the Cecilia High School Band and went on to play with Billy John and the Continentals and the Lafayette Concert Band. Gregory worked with J.B. Talley and was a dedicated construction foreman for 26 years. He was a member of the St. Bernard Elementary Volunteer organization where he was recognized as Volunteer of the Year for 1982-1983. He served as an officer with the Breaux Bridge Jaycee's Volunteer organization, Assistant Scout Master for Boy Scouts Troop 174, and volunteered with the Catholic Charities for 25 years. He was a member of the Krewe of Triton from 2006-2020 and had the honor of serving as Duke in 2012 and 2019. Gregory was a licensed gunsmith, loved woodworking, building furniture, backpacking, hunting and being outdoors surrounded by nature. In retirement he loved caring for his two granddaughters and great-granddaughter and was known to many as "Poppy". He loved farming is property and working on his tractor. He will be dearly missed. He is survived by his wife, Marguerite "Peggy" Guidroz of Breaux Bridge; son, Gregory J. Guidroz, Jr. of Breaux Bridge; daughter, Shantelle (Chuck) Scott of Breaux Bridge; two grandchildren, McKenzie Scott and Kylie Scott; great grandchild, Avery Patin; sister, Nancy Guidroz; two stepsisters, Judy (Harold) Theriot and Vicki (Butch) Guchereau; stepbrother, Larry (Denise) Melancon; three Godchildren, Lance Bijeaux, Carson Thibodeaux, and Denise Babineaux; and his grand-dog, Plato. He was preceded in death by his father, Frank Guidroz; mother, Beverly "Meyon" Dupuis Guidroz Melancon; stepfather, Arvillien "Junior" Melancon; paternal grandparents, Brongier and Lita Breaux Guidroz; and maternal grandparents, Joswell and Gladys Hebert Dupuis. Pallbearers will be Chuck Scott, Lance Bijeaux, Carson Thibodeaux, Britt Patin, Bart Hebert, and Katie Dupont-Mayard. Honorary pallbearers will be Trevor Granger, Todd Granger, Clayus Thibodeaux, and Mark Dupont. The family would like to thank the kind and caring support of the team from Hospice of Acadiana, Allyson, Katie, Tonya, and Latoya. In lieu of flowers, memorial donations may be made to Hospice of Acadiana, 2600 Johnston St., Ste. 200, Lafayette, LA 70503. Pellerin Funeral Home of Breaux Bridge, 211 Berard St., Breaux Bridge, LA 70517, (337-332-2111) is in charge of arrangements.
To order memorial trees or send flowers to the family in memory of Gregory James Guidroz, Sr., please visit our flower store.