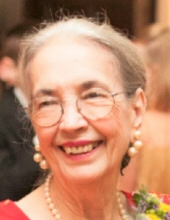 Iris Louise Fages Castille passed away peacefully surrounded by family on March 4, 2021 at the age of 90. Iris is survived by her daughters Aline Castille Allain and husband Peter, Ruby Catherine Castille and Julie Claudette Castille; her seven grandchildren Megan Allain Malady and husband Kevin, Peter Albeo Allain, Emily Allain Chauvin and husband Clarke, Lauren Allain Vo and husband Bee, Elizabeth Allain Pergola and husband Giordan, Patrick Allain and Daniel Allain; and her eight great-grandchildren Audrey, Ella, Michael, Lily, Anna, Clara, Alice, and Logan. Preceded in death by her husband Roland Claude Castille; her parents Jules Fages and Annie Thiery Fages; and sisters Genevieve Fages, Marie Fages Carlson, and Anna Fages Remoy. Iris was a 1946 graduate of Mt. Carmel Academy of New Iberia. She was a longtime resident of New Iberia where she worked as a bookkeeper and secretary at Mt. Carmel Academy. She later moved to Lafayette where she worked at the Lafayette Public Library until her retirement. Late in life she moved to Harahan, La. to be close to family. She was a faithful member of Our Lady of Wisdom Catholic Church in Lafayette where she volunteered. She also volunteered as a Pink Lady at the Lafayette General Hospital. Iris was best known for her friendly personality and her unwavering devotion to her Catholic Faith. She enjoyed reading, gardening and the arts, but her greatest joy was her daughters, grandchildren and great-grandchildren. A Mass of Christian Burial will be held at 11:30 am on Wednesday, March 10, 2021 at St. Peter’s Catholic Church in New Iberia. Rev. William Blanda will be the Celebrant. Visitation for family and friends will be at Pellerin Funeral Home in New Iberia on Wednesday from 8:30 am until 11:00 am. A rosary, led by Deacon Durk Viator, will be prayed at 9:30 am on Wednesday. Pellerin Funeral Home, 502 Jefferson Terrace Blvd, New Iberia, LA 70560 (337-365-3331) is in charge of arrangements.
To order memorial trees or send flowers to the family in memory of Iris Fages Castille, please visit our flower store.