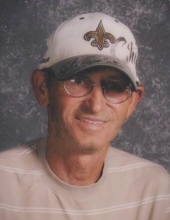 Henderson - A Mass of Christian Burial will be celebrated at 11:00 am on Friday, January 15, 2021, at Our Lady of Mercy Catholic Church in Henderson for James "Chop" Choplin, 69, who passed away on Sunday, January 10, 2021. The family requests that visiting hours be observed at the funeral home in Cecilia from 3:30 pm until 9:00 pm on Thursday and continue on Friday at 8:00 am until 10:30 am. A rosary will be prayed at 7:00 pm on Thursday. Rev. Garrett McIntrye will officiate at the Funeral Mass. Interment will follow at St. Michael the Archangel Cemetery in Henderson. James, better known as “Chop” to his family and friends, graduated from Comeaux High School in 1970. He worked for Union Camp aka "International Paper” for 30 years and with St. Martin Parish School Board for 5 years. He served two terms on the Broussard City Council. Chop loved watching the Saints, LSU Tigers, UL Ragin Cajuns, and the Cecilia Bulldogs. He loved coaching and playing softball. Chop loved watching his grandchildren play sports such as: baseball, volleyball, and soccer. He enjoyed reading, history, and doing puzzles. Because of his exceptional skill at playing horseshoes, he was known to many as the "Horseshoe King." Chop loved his family, especially spending time with his grandchildren who referred to him as "Poppa." He will be dearly missed. He is survived by his wife, Peggy LeGrand Choplin; three daughters, Christy Meaux (Josh), Misty Alleman (Korey), and Carmen Choplin (Jason Hohle); grandchildren, Tinlley Allemon, Hadin Hohle, Riley Meaux, Rainey Meaux, and Jax Hohle; three brothers, George Choplin (Lena), Perry Choplin (Renee), and Joey Choplin (Tammy); and three sisters, Linda Romero (Richard), Gail Freeman (Allen), and Ruthy Guidry (Neal). He was preceded in death by his parents, George and Lillie Landry Choplin, Sr.; in-laws, Paul and Lorena LeGrand; paternal grandparents, Alexander Eugene and Olivia Choplin; and maternal grandparents, Lavance and Benita Landry. Pallbearers will be Drew Guidry, Josh Meaux, Brian Romero, Korey Alleman, Perry Choplin, Jason Hohle, Jason Choplin, and Cody Freeman. Honorary pallbearers will be Hadin and Jax Hohle, Riley and Rainey Meaux, and Tinlley Alleman. The family would like to extend a special thanks to Amedysis Hospice nurses and staff, especially Monique, Dana, Stuart, and Vickie. Pellerin Funeral Home of Cecilia, 2238 Bushville Hwy., Cecilia, LA 70521, (337-332-2111) is in charge of arrangements.
To order memorial trees or send flowers to the family in memory of James "Chop" Choplin, please visit our flower store.