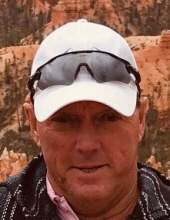 St. Martinville - A Mass of Christian Burial will be celebrated at 10:00 am on Saturday, March 27, 2021, at St. Martin de Tours Catholic Church in St. Martinville for James "Jim" Douet, Jr., 61, who passed away on Wednesday, March 24, 2021, at 1:41 pm. The family requests that visiting hours be observed at the funeral home from 3:00 pm until 9:00 pm on Friday and continue on Saturday at 8:00 am until 9:45 am. A rosary will be prayed at 7:00 pm on Friday. Fr. Neil Pettit will officiate at the Funeral Mass. Interment will follow at St. Michael Cemetery in St. Martinville. James “Jim” Douet, Jr. was born August 11, 1959 to Edith and James Douet, Sr., the second of eight children. Jim began his career as an electrical lineman with the City of St. Martinville where he worked for 14 years. He retired in 2018 from the Lafayette Utility System after 15 years of service. Always eager to answer the call, Jim was instrumental in restoring power to hard hit cities all across the southern states in the aftermath of hurricanes and devastating floods, often being the first to volunteer. Jim was a man who enjoyed life to the fullest and loved the outdoors! He enjoyed golfing and was an avid hunter and fisherman. He was also a fierce competitor, ranking 76th in the 60+ age division (worldwide) in the 2020 CrossFit games season. He mastered anything he put his mind to doing. He was a true beast! Jim was a volunteer firefighter for about 35 years in St Martinville. During his 14 years of service to the City of St. Martinville, he was always one of the first firefighters to the scene. Always the life of the party, and always a jokester, his quick wit and colorful language never ceased to provide laughter and entertainment. He made the best lemon drop martinis, not to mention those famous pralines he made during the holidays. His favorite vacation was always snow skiing at Mardi Gras with family and friends. Jim leaves behind his loving wife Janet Melancon Douet, three sons Jake, Matthew, and Andrew, daughter in law Heidi (Poche), his two granddaughters Emma and Maddi who he absolutely adored, his siblings Genevieve Trahan, Elizabeth Vicknair, Mike Douet (Susan), Jennifer Girouard (Mark), Sonya Bourque (Isaac), and Nicole Suire (Brock). Waiting to meet him at Heaven’s gate are his parents James and Edith, his brother Scotty, his sister in law Jenise Douet, and his brother in law Kirk Trahan. Jim will be deeply missed by all who knew him. We will hold his memory close in our mind and in our heart. We will remember him in our laughter. Pallbearers will be Jake Douet, Matthew Douet, Andrew Douet, Michael "Mike" Douet, Roy Poche, Karl Douet Sr.. Honorary pallbearer will be Roland Guillot Sr. Pellerin Funeral Home of St. Martinville, 112 New Market St., St. Martinville, LA 70582, (337-332-2111) is in charge of arrangements.
To order memorial trees or send flowers to the family in memory of James "Jim" Douet, Jr., please visit our flower store.