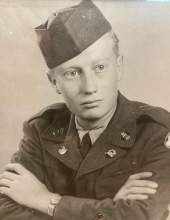 Leonville - A Mass of Christian Burial will be celebrated at 2:00 pm on Thursday, May 27, 2021, at St. Leo the Great Catholic Church for James Guidroz, 92, who passed away on Tuesday, May 25, 2021, at J. Michael Morrow Memorial Nursing Home.The family requests that visiting hours be observed at the funeral home in Arnaudville from 9:00 am until 1:30 pm on Thursday.A rosary will be prayed at 12:00 pm on Thursday.Rev. Darren Eldridge will officiate at the Mass of Christian Burial. Interment will follow at St. Leo the Great Cemetery in Leonville. James was born May 31, 1928 in Arnaudville. He honorably served in the United States Army and is a Korean War Veteran. His job in the military was in reconnaissance division developing pictures. Following the military, James was an operator on dredge boats. He was a hard worker and his work gave him the opportunity to travel to many places around the world. He will be dearly missed. He is survived by his nephews, Harry "T-Boy" Savoie, David Guidroz (Debra), Jeffrey Guidroz and Perry Guidroz (Beth); nieces, Shirley Barron (Ray), Annie Fontenot (Jimmie), Karen Castille (Donald) and Susan Melancon (Troy).He was preceded in death by his parents, J.D. and Margarette Peariou Guidroz; brother, Frank Lee Guidroz; sister, Leona Mae Savoie; infant brother, Infant Guidroz.Pallbearers will be David Guidroz, Kevin Guidroz, Jamie Fontenot, Brad Fontenot, Jason Castille and Blake Castille. Pellerin Funeral Home of Arnaudville, 314 St. Landry St., Arnaudville, LA 70512, (337-332-2111) is in charge of arrangements.To view on-line obituary, sign guestbook go to www.pellerinfuneralhome.com
To order memorial trees or send flowers to the family in memory of James Guidroz, please visit our flower store.