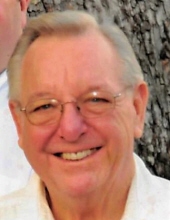 New Iberia - Funeral Services will be held at 2:00pm on Friday, February 21, 2020 at Pellerin Funeral Home in New Iberia for James K. Grigsby, 86, who passed away after a lengthy illness on Monday, February 17, 2020, in New Iberia. Rev. Creig Davis will officiate. Entombment will follow at Holy Family Cemetery in New Iberia. A gathering of family and friends will be Friday from 8:30am until 2:00pm. A longtime resident of New Iberia, James K. Grigsby was born in Houston, Texas on August 11, 1933 to the late James Toliver Grigsby and Etta Keltner Grigsby. He graduated from the University of Houston in 1956 with a Bachelor of Science Degree in Geology, then continued his education in Post-Baccalaureate Studies majoring in Math and Physics. James was a 32nd Degree Master Mason, and a member of Kappa Alpha Oder Fraternity. He was also a member of the Society of Exploration Geophysicists, Canadian Society of Exploration Geophysicists, European Assn. of Exploration Geophysicists, Assn. of Professional Engineers, Geologists and Geophysicists of Alberta, the Geophysical Society of Houston, where he served as President (1980-81), and the Society of Exploration Geophysicists, where he served as 2nd Vice President (1983-84). He enjoyed a 40-year career in Geophysics, managing seismic exploration for oil and gas throughout the world. He managed operations in the United States, Alaska, Canada, South America, Europe, the Far East, and Australia. His hobbies included hunting, fishing, snow skiing, and golf, but not necessarily in that order! He particularly enjoyed fishing in the Louisiana marsh with his beloved wife, Carolyn, the love of his life for many years. He cherished time spent with his family, especially hunting at their deer lease in the Texas Hill Country, snow skiing in Colorado, and golfing at Squirrel Run Golf Club in New Iberia. He is survived by his loving wife of 37 years, Carolyn Bayard Grigsby; sons, Clark H. Grigsby and spouse Darin, and Matthew K. Grigsby; stepdaughters, Carla A. Dworaczyk and spouse Dennis, and Katie M. Hunter; seven grandchildren; and five great-grandchildren. In addition to his parents, he was preceded in death by his first wife, Juanita H. Grigsby; and his beloved six year old son, Kyle K. Grigsby. Pallbearers will be Matthew K. Grigsby, Dennis Dworaczyk, Justin Dworaczyk, Dr. Shane Fontenot, Jimmy Hunter, and Andy Clay. Honorary pallbearer is Daniel Dworaczyk. The family would like to especially thank James’ personal caregivers, Josephine Lively, Sheena Linscomb, Beverly Vallier, & Jalesa Hurst for their exceptional care, love and support; and the staff of Grace Hospice and Azalea Estates. Memorial contributions may be made in James' memory to Grace Hospice and Palliative Care, 217 Rue Louis XIV – Suite 100, Lafayette, LA 70508 (337-948-9004); or Alzheimer's Association, Louisiana Chapter, 3445 N. Causeway Blvd., Suite 902, Metairie, LA 70002 (504-613-6505). Pellerin Funeral Home, 502 Jefferson Terrace Blvd., New Iberia, LA 70560 (337-365-3331) is in charge of arrangements.
To order memorial trees or send flowers to the family in memory of James K. Grigsby, please visit our flower store.