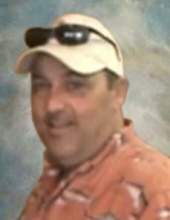 Breaux Bridge - A Mass of Christian Burial will be celebrated at 1:30 pm on Friday, February 19, 2021, at St. Bernard Catholic Church in Breaux Bridge for Jason Wayne Dugas, 55, who passed away on Tuesday, February 16, 2021, at St. Joseph Hospice. The family requests that visiting hours be observed at the funeral home from 1:00 pm until 8:00 pm on Thursday and continue on Friday at 9:00 am until 1:30 pm. A rosary will be prayed at 7:00 pm on Thursday by Deacon Shawn Gautreaux. Rev. Garrett McIntyre will officiate at the Funeral Mass. The reader will be David Conley Dugas. Interment will follow at St. Bernard Cemetery No. 2 in Breaux Bridge. Jason grew up in Breaux Bridge, Louisiana, one of six. He had 4 brothers and 1 sister. As a young man he worked hard at the Donut Shop to buy his first car in cash, a blue corvette which is his favorite! His daddy didn’t believe in credit, and of course it was no ordinary ‘Vette, he had to get one that had a hopped-up motor to go with his bigger than life personality. He later started working in the oil field which would be his career path. He had three beautiful children, Chase, Beau, and Jake who are the light of his life and kept his spirits going through his diagnosis of locked-in-syndrome. Prior to his diagnoses, he enjoyed spending time hunting at his company’s hunting camp in Marksville, Louisiana, as well as fishing at his favorite place on earth - Toledo Bend. He worked hard during the week and would love the outdoors on the weekends! He also was the PIT MASTER. He loved to BBQ steaks from Earl’s on his “Old Smokie”! To know him is to love him. He was quiet but always had the best little inside jokes that would keep you laughing. As for shrimp stew, you drop them in - when they turn red it’s done, another Miller Lite, THAT’S CHURCH. Jason, you will be missed. God keep you until we meet again! He is survived by his two sons, Chase Wayne Dugas and Jake Elliot Dugas; daughter, Beau Alexus Dugas; granddaughter, Olivia Christine Goudeau; sister, Denise Odell Dugas Guillory (Darrell); three brothers, Jack Russell Dugas, Jr. (Loraine), David Conley Dugas (Kerry), and Randall Gabriel Dugas; mother of his children, Candace Dugas; and his mother-in-law, Annette Greene. He was preceded in death by his father, Jack Russell Dugas, Sr.; mother, Barbara Nell Danos Dugas; brother, James Dale Dugas; maternal grandparents, Paul and Magda Melancon Danos; paternal grandparents, Louis Conley and Celonie Patin Dugas; and his father-in-law, Rowe Greene. Pallbearers will be Chase Wayne Dugas, Jake Elliot Dugas, Jack Russell Dugas, Jr., David Conley Dugas, Randall Gabriel Dugas, and Craig Broussard. Pellerin Funeral Home of Breaux Bridge, 211 Berard St., Breaux Bridge, LA 70517, (337-332-2111) is in charge of arrangements.
To order memorial trees or send flowers to the family in memory of Jason Wayne Dugas, please visit our flower store.