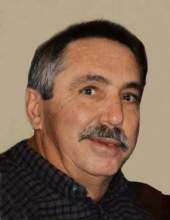 Arnaudville - A Mass of Christian Burial will be held at 1:30 pm on Thursday, May 13, 2021 at St. John Francis Regis Catholic Church in Arnaudville for Jimmy Charles Frugé, 64, who passed away on Friday, April 23, 2021, at his residence. Father Travis Abadie will officiate the Mass. Inurnment will follow at St. John Francis Regis Catholic Cemetery. Jim attended Cecilia High School, where he was also a member of the CHS band. He joined because of his love for music, which lasted throughout his adult years. He also had a great interest in fast cars and mechanics. In 1978, Jim earned his certification as a mechanic and while employed by Roper GMC, he earned his certification as a GMC transportation technician. He used those certifications to obtain employment by local mechanic shops and quickly became known as one of the best transmission mechanics in the area. Jim then made the decision to open his own business, Jim’s Auto Repair, and remained owner and operator for the remainder of his career. During this time, he and his friend, John Gross, became co-owners of a dragster. Jim loved every minute of this experience from building out the car and days at the races to the camaraderie within other race car owners. He also enjoyed mentoring anyone who showed interest in this field, or basically anyone who would take the time to sit and listen to him talk. In addition to music and fast cars, Jim also had a love for the water, whether it be boating, or just sitting on the levee banks fishing. This was a love he would pass down to his daughter. Lastly, but not least, Jim loved his family and friends dearly. He will be remembered for his loving and caring heart. He is survived by his daughter, Sammy Frugé Calais; son, Lincoln Frugé; step-mother, Mary Alice Frugé; sister, Linda F. Doré (Clayton); sister-in-law, Carolyn Frugé; step-sisters, Linda Thibodeaux (Ricky) and Cindy M. Linscomb (Roland); grandchildren, Kamille Anne Taylor and Keatyn Anne Calais; and nephews, Jason Paul Frugé, Jr., Jamie Frugé, Caleb Doré, Casey Doré and Chandler Doré. He was preceded in death by his father, LuDovic Frugé; mother, Shirley Frugé; brother, Jason Frugé; maternal grandparents, Ovan and Marie Anna Knott; and paternal grandparents, Christopher and Ida Frugé. To assist with the cost of funeral expenses, and in lieu of flowers, the family requests that donations be made to Pellerin Funeral Home, 232 Courthouse St., Breaux Bridge, LA 70517. Pellerin Funeral Home (337-332-2111) is in charge of arrangements.
To order memorial trees or send flowers to the family in memory of Jimmy Charles Frugé, please visit our flower store.