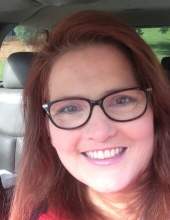 New Iberia - A Funeral Service will be held at 10:00 am on Thursday, July 1, 2021, at Pellerin Funeral Home in New Iberia for Jo-Ellen Elizabeth Hipp-Hatch, 55, who passed away on Wednesday, June 23, 2021, in Georgia.Paul Fontenot will officiate.The family requests that visiting hours be observed at the funeral home from 5:00 pm until 8:00 pm on Wednesday, and continue on Thursday at 8:00 am until 10:00 am. Interment will follow at Beau Pre Cemetery in Jeanerette. We celebrate a life well-lived yet mourn the far too early passing of Jo-Ellen Hipp-Hatch, loving wife, mother, daughter and sister. She is preceded in life by husband Bradley John Hatch; children, William and Goldie Hatch; father, James Hipp; brother Bryant Hipp; sisters Jamie Cimo (Henry), Leeanne Bonin (Greg). Jo was preceded in death by her mother, Marilyn Hipp.Jo was born in New Iberia, LA and attended NISH and graduated in 1985. She attended the University of Louisiana at Lafayette where she was a standout student in the drama department, where she cultivated her lifelong passion for the theatre. Jo and Brad were married on February 6, 1988 during a snowstorm that rocked the southern gulf states. Jo and Brad then moved to Georgia where they were blessed with a son, William and a daughter, Goldie.The family began a faith-based life attending Mountain Park United Methodist Church which eventually led to them being one of the ten core founding members of establishing the Sugarloaf United Methodist Church. Raising her family in Lawrenceville, GA, Jo was instrumental in helping to advance the theatre and drama departments at Providence Christian Academy and many local arts and theatre productions in the area. She was recognized in 2020 for her tireless dedication to Providence by being only one of six inductees in the past 30 years to be designated as an “Honored Friend of Providence Christian Academy”. Jo will be sorely missed by those who were blessed to know her. We will all miss her wit and humor, but most of all we will miss her loving spirit and kind heart that touched us all. Jo, we miss your effervescent presence and are comforted in knowing that you are enjoying God’s eternal and perfect paradise in Heaven.Pallbearers will be Bryant Hipp, Ted Hatch, Henry Cimo, Greg Bonin, Paul Fowler, and Bert Dore.In lieu of flowers, Jo requested attendees bring socks, underwear, and pajamas for female and male school age children. Jo’s family will deliver these donations to “Gift of Hope”, a local non-profit organization near Jo’s residence which supports over 500 foster children and families. Pellerin Funeral Home, 502 Jefferson Terrace Blvd., New Iberia, LA 70560, (337-365-3331) is in charge of arrangements.<iframe class="ts_player" allowfullscreen="true" allowtransparency="true" allow="autoplay; fullscreen" frameborder="0" height="330" scrolling="no" src="https://www.tributeslides.com/videos/embedded_video/D3LG25BSD2LFQKMM" width="512"></iframe>
To order memorial trees or send flowers to the family in memory of Jo-Ellen Elizabeth Hipp-Hatch, please visit our flower store.