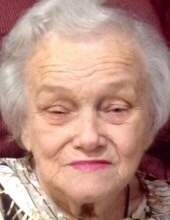 Breaux Bridge - A Mass of Christian Burial will be held at 1:30 pm on Friday, September 3, 2021, at St. Bernard Catholic Church in Breaux Bridge for Joann B. Courville, 78, who passed away on Saturday, August 28, 2021.The family requests that visiting hours be observed at the funeral home from 3:00 pm until 9:00 pm on Thursday and continue on Friday at 8:00 am until 1:00 pm. A rosary will be prayed at 6:30 pm on Thursday.Rev. Garrett McIntyre will officiate at the Funeral Mass. Readers will be Marla Broussard and Hailey Melancon. Gift bearers will be Maeve Broussard, Cadence Franzoy, and Reagan Franzoy. Altar servers will be Caleb and Joshua Frederick.Interment will follow at St. Michael the Archangel Cemetery in Henderson.Joann was born November 4, 1942. She was devout Catholic and loved the Lord. She looked forward to her annual Birthday and Mother's Day trips to the casino with her daughters. As a pastime, she enjoyed playing Bingo on her tablet and reading the Teche News. Joann resided at the Breaux Bridge Manor Apartments and adored her neighbors that visited and checked on her daily. Her family was important to her, especially her grandchildren and great grandchildren. She will be deeply missed. She is survived by her three daughters, Cheryl Overmyer, Barbara Melancon, and Gloria Frederick (Daniel); grandchildren, Heather Franzoy, Ali Overmyer, Hailey Melancon, Marla Broussard, Kaitlyn Melancon, Caleb Frederick and Joshua Frederick; and great grandchildren, Cadence Franzoy, Reagan Franzoy, Maeve Broussard, and Guy Broussard, V.She was preceded in death by her husband, Douglas Courville; parents, Cyril and Clara Theriot Belaire; siblings; and son-in-law, Ronald "Boze" Melancon. Pallbearers will be Caleb Frederick, Joshua Frederick, Daniel Frederick, Floyd Duplantis Jr., Guy Broussard IV and Daniel Reeve.The family would like to extend a SPECIAL THANKS to Sharon, Pat, Karen, and Ms. Mary for always making her feel like she was part of their family at The Manor. Also, a special thanks to Dr. Warren Degatur for the care given to our Mom.Pellerin Funeral Home of Breaux Bridge, 211 Berard St., Breaux Bridge, LA 70517, (337-332-2111) is in charge of arrangements.<iframe class="ts_player" allowfullscreen="true" allowtransparency="true" allow="autoplay; fullscreen" frameborder="0" height="330" scrolling="no" src="https://www.tributeslides.com/videos/embedded_video/SQKFJH56S7CCSYF2" width="512"></iframe>
To order memorial trees or send flowers to the family in memory of Joann B. Courville, please visit our flower store.