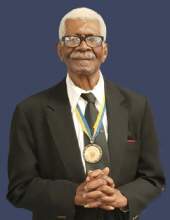 Breaux Bridge - A Mass of Christian Burial will be held at 10:30 am on Saturday, June 26, 2021, at St. Francis of Assisi Catholic Church in Breaux Bridge for John H. Alexander, 84, who passed away in Houston, TX.The family requests that visiting hours be observed at the funeral home from 7:00 am until 10:00 am on Saturday.Interment will follow at St. Francis of Assisi Cemetery in Breaux Bridge. John H. Alexander passed from this life on Monday, June 14, 2021. He loved and prayed for his family, grandchildren, great-grandchildren, and his friends at church and in the community. Indeed, he loved and cherished everyone who ever touched his life. John was a man of God and lived his faith every day of his life.Born in Breaux Bridge, LA on February 17, 1937, John moved to Texas in the late 1950s. He was united in Holy Matrimony with Julia Charles Alexander in August 1961; and from their union was born a daughter, Carolyn Jeanette Alexander. John and Julia made Houston their home where they spent the remainder of their lives.Although John's career and gainful employment was with the Houston Chronicle, his real mission in life was service, which began after he retired from the Chronicle. He took very seriously his membership for over 60 years at St. Nicholas Catholic Church. The organizations the church sponsors provided him the platform to do good works for his neighbor. He was a member of the Knights of Peter Claver for well over thirty years, serving as Third Degree Grand Knight and Fourth Degree Deputy Grand Knight. He was also an active participant in the Holy Name Society and the Legion of Mary Auxiliary, and performed tireless volunteer work at St. Vincent de Paul Food Pantry, St. Dominic Nursing Home and the VA Hospital. John cared so much for others that friends amusingly said he was a "man who never owned the car but delivered more food to people in need than anyone with a car." He is survived by his daughter, Carolyn Jeanette Alexander of Seattle, WA; grandchildren, Talita Haywood (Emma Haywood), Salita Chea (Kanphana Chea), Jefferey Haywood; host of great grandchildren; brothers, Vincent Alexander (Tasey Ann Tolliver Alexander) and Dr. Livingston Alexander (Evelyn Alexander); half-siblings, Willie Mae Alexander Showers, Fannie Wiltz Alexander, Mary Alexander Williams and Nelson Wiltz; niece, Sandra Sinegal; and nephew, Gregory Alexander.He was preceded in death by his wife, Julia Charles Alexander; parents, Joseph and Eugenia Alexander; brother, Chester Alexander; sister, Janet Alexander; half-sister, Mary Irene Ledet; half-brothers, Robert Alexander and Jimmy Leblanc; grandson, Leonard Haywood; niece, Sharon Singleton Maxie; and nephew, Troy Alexander. Pellerin Funeral Home of Breaux Bridge, 211 Berard St., Breaux Bridge, LA 70517, (337-332-2111) is in charge of arrangements.
To order memorial trees or send flowers to the family in memory of John H. Alexander, please visit our flower store.