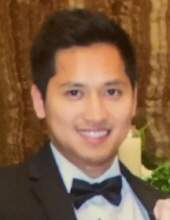 Breaux Bridge - A Mass of Christian Burial will be celebrated at 11:00 am on Monday, March 29, 2021, at St. Bernard Catholic Church in Breaux Bridge for John Van Phan, 31, who passed away on Tuesday, March 23, 2021. The family requests that visiting hours be observed at the funeral home from 5:00 pm until 8:00 pm on Saturday and continue on Sunday at 5:00 pm until 8:00 pm. A rosary will be prayed at 6:00 pm on Saturday and a Vietnamese Mass will be held in the funeral home at 6:00 pm on Sunday. Interment will follow at St. Bernard Cemetery No. 2 in Breaux Bridge. John was born December 17, 1989. He was an accountant and thoroughly loved his job. John was very active and enjoyed activities such as football, basketball, fishing, and running. He loved his family and cherished the moments spent with them. He will be dearly missed. He is survived by his mother, Phuong Pham; father, Bay Phan; three sisters, Kim Phan, Oanh Phan and Lan Batiste (Jeremiah); niece, Chloe Batiste; and three nephews, Jason Phan, Roman Williams, and Ray Williams. He was preceded in death by his four brothers, Binh Phan, Vien Phan, Truong Phan and Chinh Phan; sister, Nguyet Phan; and one nephew, Ethan Williams. Pellerin Funeral Home of Breaux Bridge, 211 Berard St., Breaux Bridge, LA 70517, (337-332-2111) is in charge of arrangements.
To order memorial trees or send flowers to the family in memory of John Van Phan, please visit our flower store.