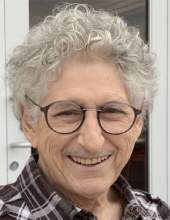 New Iberia - Memorial services will be held at 1:00 pm on Tuesday, July 7, 2020, at Pellerin Funeral Home in New Iberia for Joseph Anthony "Pappie" Lorenzo, III, 71, who passed away on Thursday, July 2, 2020, in New Iberia. Deacon Durk Viator will officiate at the Memorial Service. Private entombment will be at a later date. A gathering of family and friends will be Tuesday from 11:00 am until 1:00 pm at Pellerin Funeral Home. A resident of New Iberia, Joseph Anthony "Pappie" Lorenzo, III was born in Franklin, LA on August 27, 1948. He was a graduate of USL, now the University of Louisiana Lafayette and he proudly served our country in the U.S. Navy during the Vietnam War.He was a loyal and devoted husband, father, and "Pappie". Joseph was a kind-hearted and generous man, who was absolutely brilliant and amazing, like "Einstein". He would put a smile on any face. Joseph lived life to the fullest, growing the most beautiful roses and writing insightful poems. A bright light in the world who will continue to shine on through all the lives that he touched. He was fascinated with sailing and loved making sailboats from rocks and driftwood that he collected from his travels. "Pappie" is now sailing. He is survived by his wife of 49 years, Karen Couvillier Lorenzo; daughter, Shannon; granddaughter, Morgan Leigh Lorenzo (Trevor Jolivette); grandson, Samuel Patrick Lorenzo-Baker; sisters, Brenda Boudreaux, Lynnie Scully (Pat), Carolyn Sauce (Larry), Sandra Sakwa and Sarah Krilla (Dennis), brothers, Michael Lorenzo, Gary Lorenzo, Rick Lorenzo (Susan) and Mark Lorenzo; sister-in-law, Denise Charpentier (David); brothers-in-law, Brian Couvillier (Mary) and Lloyd Couvillier; and John "Johnny Boy" Charpentier along with many other nephews and nieces who he loved dearly. He was preceded in death by his mother, Louise Lorenzo; great grandson, Leo Anthony Fremin; sisters, Beverly Lorenzo and Cheryl Patterson; father and mother-in-law, Arthur "Pappa Hoss" and Ruby Boudreaux Couvillier. Pellerin Funeral Home, 502 Jefferson Terrace Blvd., New Iberia, LA 70560, (337-365-3331) is in charge of arrangements.
To order memorial trees or send flowers to the family in memory of Joseph Anthony Lorenzo, III, please visit our flower store.