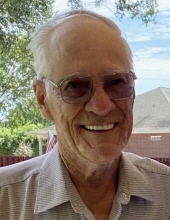 Breaux Bridge - A Mass of Christian Burial will be celebrated at 11:00 am on Thursday, February 4, 2021, at St. Bernard Catholic Church in Breaux Bridge for Joseph "Boon" Surven Landry, 90, who passed away on Sunday, January 31, 2021, at his residence. The family requests that visiting hours be observed at the funeral home from 9:00 am until the time of service on Thursday. A rosary will be prayed at 10:00 am on Thursday. Rev. Garrett McIntyre will officiate at the Funeral Mass. Interment will follow at St. Bernard Mausoleum - No. 1 in Breaux Bridge. Boon was a devout Catholic and parishioner of St. Bernard Catholic Church. He served as the groundskeeper there for over 10 years and also often served as an usher. Boon was truly a "Jack of all trades". He did many different things throughout his life which included farming, oilfield work, carpentry, and plumbing. Boon was known around town for fixing lawn mowers. He always made himself available for anyone in need. He was a loving father and grandfather with a heart of gold, who will be greatly missed by all who knew and loved him. He is survived by his daughters, Patsy Gaudet (Larry) of Baldwin, Yvonne Dugas of St. Martinville, and Judy Usie (Perry) of Breaux Bridge; grandchildren, Francis Landry, Jr., David Dugas, Paula Landry, Marlene Landry (Todd) and Jill Shepherd (Brian); great-grandchildren, Emily Landry, Kayla Landry, Jada Landry, and Travis Landry; and great-great-grandchildren, Emma Landry, Blakely Dogua, Royal-Lyn and Khaza Landry. He was preceded in death by his beloved wife, Doris Belaire Landry; parents, Joseph J. and Basaline Blanchard Landry; son-in-law, Michael Dugas; brother, Nolan Landry; and honorary son, Jerry Spradlin. Pallbearers will be Francis Landry, Jr., Travis Landry, Todd Landry, Spencer Dogua, Allen Belaire and Leonard Belaire. In lieu of flowers, the family requests donations be sent to Hospice of Acadian at https://www.hospiceacadiana.com/donate/ Pellerin Funeral Home of Breaux Bridge, 211 Berard St., Breaux Bridge, LA 70517, (337-332-2111) is in charge of arrangements.
To order memorial trees or send flowers to the family in memory of Joseph "Boon" Surven Landry, please visit our flower store.