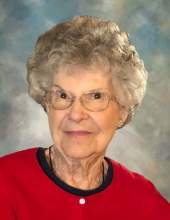 Breaux Bridge - Funeral services will be held on Wednesday, September 8, 2021 for Joyce Eddy Dupuis, who died Sunday, September 5, at her home. Visitation will be held at Pellerin Funeral Home in Breaux Bridge. Visitation will begin at 10:30 am, with a Rosary being prayed at 2:00 pm. Mass in celebration of her life will be at 4:00 pm, in St. Bernard Church, officiated by Fr. Bill Melancon. Con-celebrant of the Mass will be Deacon Ken Soignier.The family has requested that friends and relatives attending visitation and services wear masks and practice social distancing.Burial will be in St. Bernard Cemetery 2.Mary Joyce Eddy Dupuis was born to Willie Eddy and Laura Daigle Eddy on July 20, 1931, in St. Martin Parish near Cecilia. She received her education in Cecilia, graduating as valedictorian of the Cecilia High School Class of 1948. Immediately upon graduation, she began working in the insurance industry, which remained her career choice for many years. In 1950, she married Frank Dupuis and together they built their home in Breaux Bridge, where they raised their family. Joyce opened her insurance agency in1952 and worked in that business while her family continued to grow. She became active in civic and school-related activities, serving as president of the St. Bernard School Parent-Teacher Association, Chair of the St. Bernard School Christmas Bazaar and as home-room mother. She also served on the St. Bernard Church-School Committee that was charged with exploring a resolution to the school’s closing in 1965. Joyce worked as editor and distributor of a newspaper. The Dispatch was a local newspaper serving Breaux Bridge and the surrounding area. That work helped her gain knowledge of the economic needs and political climate of St. Martin Parish, which was of value when she was asked to serve on the first Board of Commissioners that was established to spearhead construction of a hospital in Breaux Bridge for St. Martin Hospital District #2. With four other commissioners, her work helped set the wheels in motion for the acquisition of land and the construction of what became St. Martin Hospital. In 2019, the 50th anniversary of the hospital’s dedication, she was honored as the only surviving member of the original Board of Directors of the Commission.Another cause dear to her was the formation of Affiliated Blind of Louisiana (ABL). This organization was formed to assist, assimilate and educate blind and visually impaired citizens. Joyce served on the original Board of Directors as State Coordinator and was instrumental in the acquisition of the extensive property that became the ABL campus. Interest in and support of ABL became a source of fulfillment for her for many years.Survivors include her children: Sherry D. LeBlanc, Blake Dupuis and his wife, Morele, Marlene D. Castex and her husband, Harvey, Nadine D. Brou and her husband, James, Frank K. Dupuis, Howard Eddy Dupuis and his wife, Anne and Herbert J. Dupuis; grandchildren Matt LeBlanc and his wife Amy; Chad LeBlanc and his fiancée, Wendy George, Kristen LeBlanc, Robin Hammonds and her husband, Jason, Josh Brou and his wife, Cali, Chance Brou, Colin Dupuis, Ethan Dupuis and Madison Dupuis. She is also survived by great-grandchildren Marin Hammonds, Camille Brou and Jake Brou. She was preceded in death by her parents, her brother, Howard Joseph Eddy, her husband, Frank Dupuis, granddaughter, Allison Castex, and son-in-law, Donald Paul LeBlanc.Serving as pallbearers are Matt LeBlanc, Chad LeBlanc, Joshua Brou, Chance Brou, Jason Hammonds and Colin Dupuis. Honorary pall bearers will be Ethan Dupuis and Herbert Dupuis.The family wishes to express special thanks to her caregivers Nancy Guidroz, Helen Singleton, Rita Hebert, Tandra Celestine and Constance Arceneaux for their loving service and dedication.Pellerin Funeral Home of Breaux Bridge, 211 Berard St., Breaux Bridge, LA 70517, (337-332-2111) is in charge of arrangements.<iframe class="ts_player" allowfullscreen="true" allowtransparency="true" allow="autoplay; fullscreen" frameborder="0" height="330" scrolling="no" src="https://www.tributeslides.com/videos/embedded_video/8CKX3FCD9953YC45" width="512"></iframe>
To order memorial trees or send flowers to the family in memory of Joyce Eddy Dupuis, please visit our flower store.