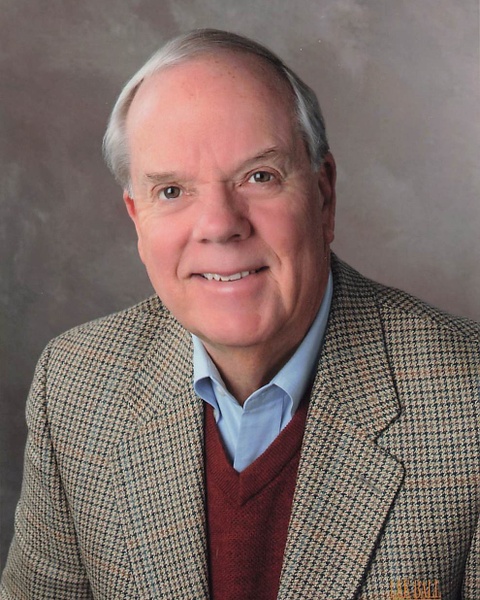 Interment with military honors will follow at Holy Family Cemetery.

Visitation will be at Pellerin Funeral Home from 8:00 am until 10:00 am on Saturday.

L. Albert “Bud” Forrest was born in St. Paul, Minnesota on August 21, 1938. He was known by most as “Bud” and to his grandchildren as “Buddy”. He was preceded in death by his son, Lawrence Albert “Larry” Forrest, his wife, Adele Simon Forrest and his parents, Alice Jacobson “Kiki” Forrest and L. Albert Forrest, Sr. Bud is survived by his two daughters and sons- in- law, Dr. Lizabeth “Beth” Clarke (Drew), Laura F. Johnson (David), and four wonderful grandchildren, Forrest Clarke, Zachary Clarke, Cole Johnson and Kara Johnson (“Princess”).

He was formally educated at Bradley University and received a B.S. in 1960. While there, he was elected president of his Freshman and Junior class. Following graduation, he made his way to Louisiana to pursue a love of flying and earned his “Navy Wings” in 1962 at the former Naval Base in New Iberia. It was also during this time that he met the love of his life, Adele, and after a brief engagement, they married in December 1962. They were stationed around the United States living their Navy life as he served as a carrier pilot until 1966. The friendships that formed through their VS-28 family have lasted to this day. Following his Navy active duty, they returned to Louisiana, and he attended Tulane Law School obtaining a Juris Doctor degree in 1969.

During his law career, he served on the Board of Louisiana Association of Defense Counsel and the House of Delegates to the State Bar Association. He chaired the Indigent Defender Board, was named in the Bar Register of Preeminent Lawyers and was an active member of the Inns of Court. In 2017, he was honored for his excellence in legal ability, professionalism and integrity at a joint meeting of the American Inns of Court.

Amidst an active and distinguished career as a trial attorney, he continued flying in the Naval Reserve, retiring with the rank of Captain. Early in his Navy career, he served as a flight instructor (one of his favorite assignments) teaching aerobatics. He maintained his commercial pilot’s license and enjoyed hundreds of hours of civilian flying in all types of aircraft. If you ask him, he probably loved flying more than being a lawyer.

Bud loved the outdoors, particularly hunting and fishing with his son, nephews, brother-in-law, sons-in-law and grandsons. He was a good shot with both a pistol and shotgun but later found he preferred shooting clay pigeons rather than live birds. He taught his children and grandchildren much about the outdoors and gifted his grandsons with lifetime Louisiana hunting and fishing licenses.

He loved to travel and did so extensively throughout most of the United States, Canada, Europe and Mexico. He shared this love with his children and grandchildren. Many memories were made at the beach, at the lake, aboard cruise ships and touring historical and artistic sights of significance. Perhaps a holdover from his days aboard the carrier, Bud also loved sailing with Adele on “Island Time”. Together they visited ports from Galveston to Captiva Island.

Bud loved his grandchildren most of all, professing each to be his favorite for the unique gifts and talents they possessed. He enjoyed watching each grow and mature, attending their various sporting events near and far. They were his pride and joy.

During his travels he became fond of Broadway plays and was a supporter and occasional actor in Iberia Performing Arts League (IPAL). He served on the Kiwanis and Chamber of Commerce Boards where he strongly promoted Iberia Parish tourism. He was instrumental in the initiation of and served on the Board of Crime Stoppers. He believed in giving back as it had its own reward. He was respected within his field and within his community. A self-professed Yankee transplant who many would say epitomized a true Southern gentleman.

In lieu of flowers, the family asks that you kindly donate to IPAL, Iberia Crime Stoppers or Wounded Warriors.

To order memorial trees or send flowers to the family in memory of L. Albert "Bud" Forrest, please visit our flower store.