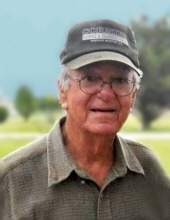 Breaux Bridge - A celebration of life will be held at 11:00 am on Saturday, April 16, 2022, at Pellerin Funeral Home in Breaux Bridge, for Lee Allen Stelly, 89, who passed away on Saturday, May 29, 2021, at Lafayette General Medical Center.

The family requests that visiting hours be observed from 10:00 am until 11:00 am on Saturday.

Lee honorably served his country in the United States Army and spent 28 months in Japan during the Korean conflict. He was an arborist who started the company, Trees of Lafayette. Lee enjoyed gardening, dancing, golf, fishing, hunting, and playing with his great-grandchildren. He took great pride in winning pool tournaments among fellow veterans, boiling crawfish, and cooking spicy gumbo. Lee was a humble man who will be remembered for his kindness and great sense of humor.

To order memorial trees or send flowers to the family in memory of Lee Allen Stelly, please visit our flower store.