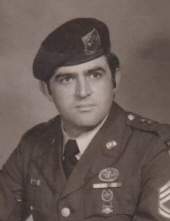 Breaux Bridge - A Mass of Christian Burial will be celebrated at 1:00 pm on Tuesday, March 30, 2021, at St. Bernard Catholic Church in Breaux Bridge for Lennet Joseph Guidry (CSM RET), 80, who passed away on Tuesday, March 23, 2021, at his residence. The family requests that visiting hours be observed at the funeral home from 9:00 am until 12:30 pm on Tuesday. A rosary will be prayed at 10:30 am on Tuesday. Father Garrett McIntyre will officiate at the Funeral Mass. Interment will follow at St. Bernard Cemetery No. 1 in Breaux Bridge. Lennet was a graduate of Breaux Bridge High School – Class of 1959, where he was a three-sport letterman in football, basketball, and track. He was a retired veteran, who honorably served in the United States Army for 38 years. Lennet was a member of many organizations including, Special Forces Association and the 82nd Airborne Association. He also served as past Commander of the American Legion and past President of the Lion's Club. In recent years, Lennet enjoyed spending time with his friends and going dancing at Pat's in Henderson. He will be greatly missed by all who knew and loved him. He is survived by his daughter, Charlotte Guidry (Amanda); and his friend, Jackdale Delhomme. He was preceded in death by his father, Simon Guidry; mother, Pauline Trahan Guidry; and brothers, Curtis Guidry and Lynwood Guidry. Pallbearers will be Perry Angelle, Dr. Mike Berard, Nolan Guidry, Wilson Thibodeaux (SFC RET), Mike Frey, and Lee Castille. Honorary pallbearers will be Jackdale Delhomme, P.J. Hebert, Mark Guidry, the Coffee Club, and Special Forces Association members. Pellerin Funeral Home of Breaux Bridge, 211 Berard St., Breaux Bridge, LA 70517, (337-332-2111) is in charge of arrangements.
To order memorial trees or send flowers to the family in memory of Lennet Joseph Guidry (CSM RET), please visit our flower store.